I took out my Light Box

again yesterday to get some photos of freesias this time (and ended up getting a little carried away with some of my other dried flowers). This post is a little bit of an explanation as to how I took the photos themselves, it’s an easy solution but almost slipped my own thinking!

I started by simply lying down the freesias on the black background (if you haven’t guessed, that’s my favourite). That was alright, but I didn’t think it quite captured the full beauty of these flowers: 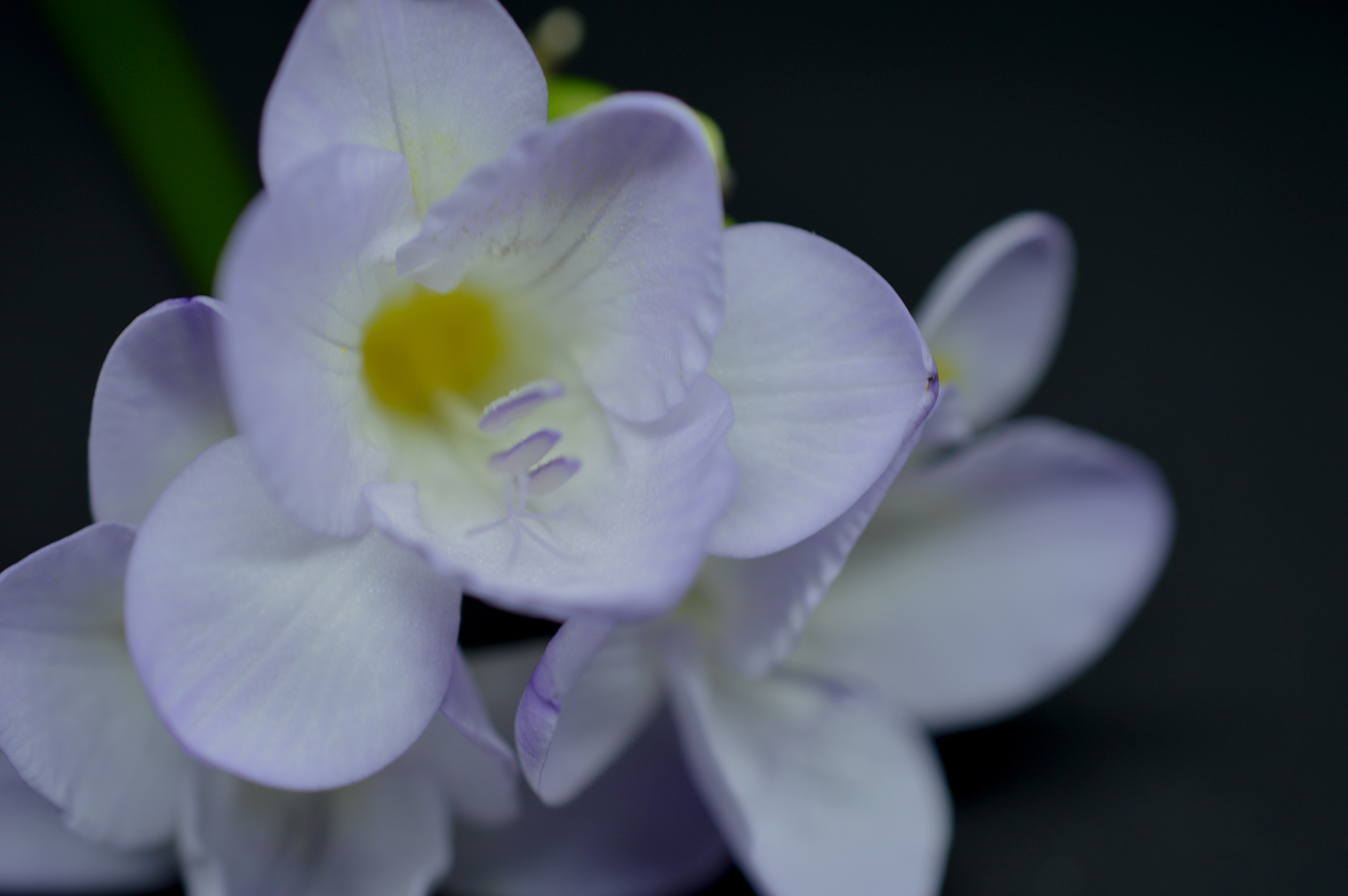 I wanted the freesias to look as they do when they’re in a vase, so I had a quick look around my room and eventually set eyes on my photo holder, the alligator clip ended up being perfect for holding the stem up! 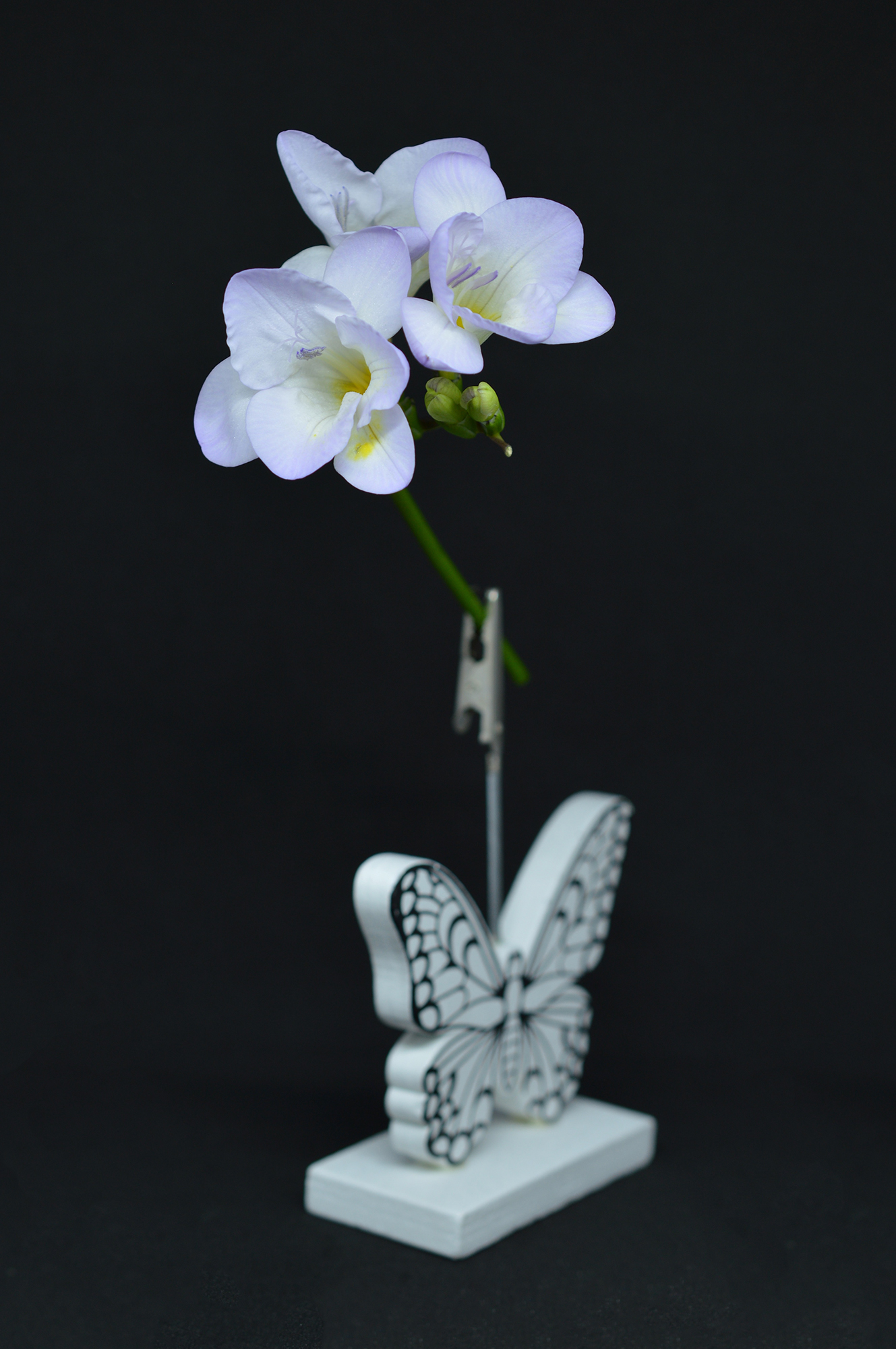 The great thing about this is my photo holder is that it’s so sturdy it can take a fair bit of weight – which works great with stems that have a lot of flowers on. I might experiment by buying a couple more and seeing if I can bunch some flowers together in photos!

If you’re interested in trying this out for yourself, I’d advise this set of 10 photo holders

as they seem pretty sturdy based off the reviews. But take a look around, I think I grabbed mine from TK Maxx years ago.

I kept going with the black background for a little while longer, with the aim of getting a photo of the freesias that really stood out!

Below are a couple of my favourite shots, I adore how they stand out against the black as it makes the light colours of the freesias so much more vibrant! 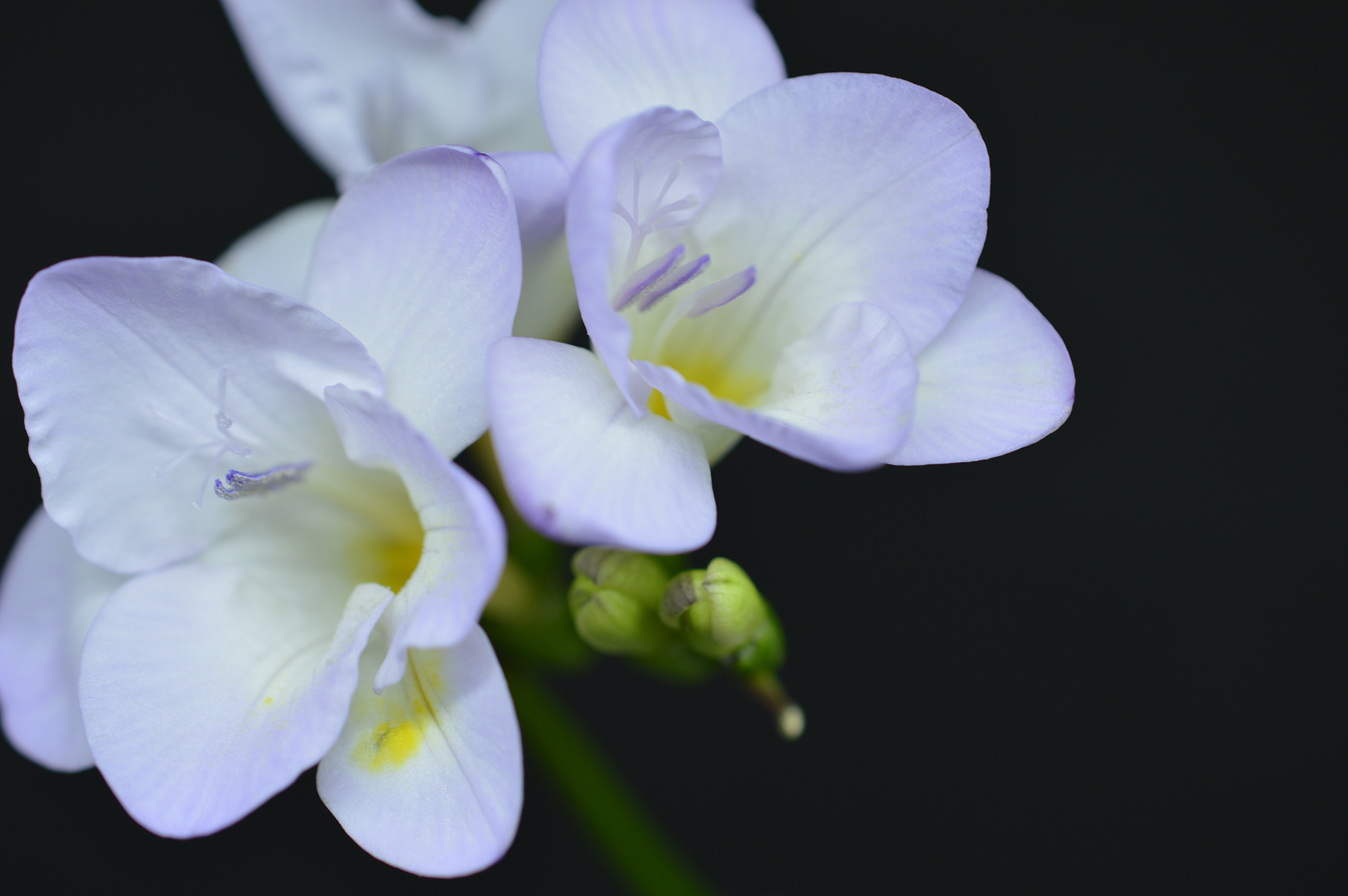 For post-processing, I tried one particular shot in black and white and I love the effect. It looks so moody in comparison to the others but the shape of the freesias alone is beautiful. 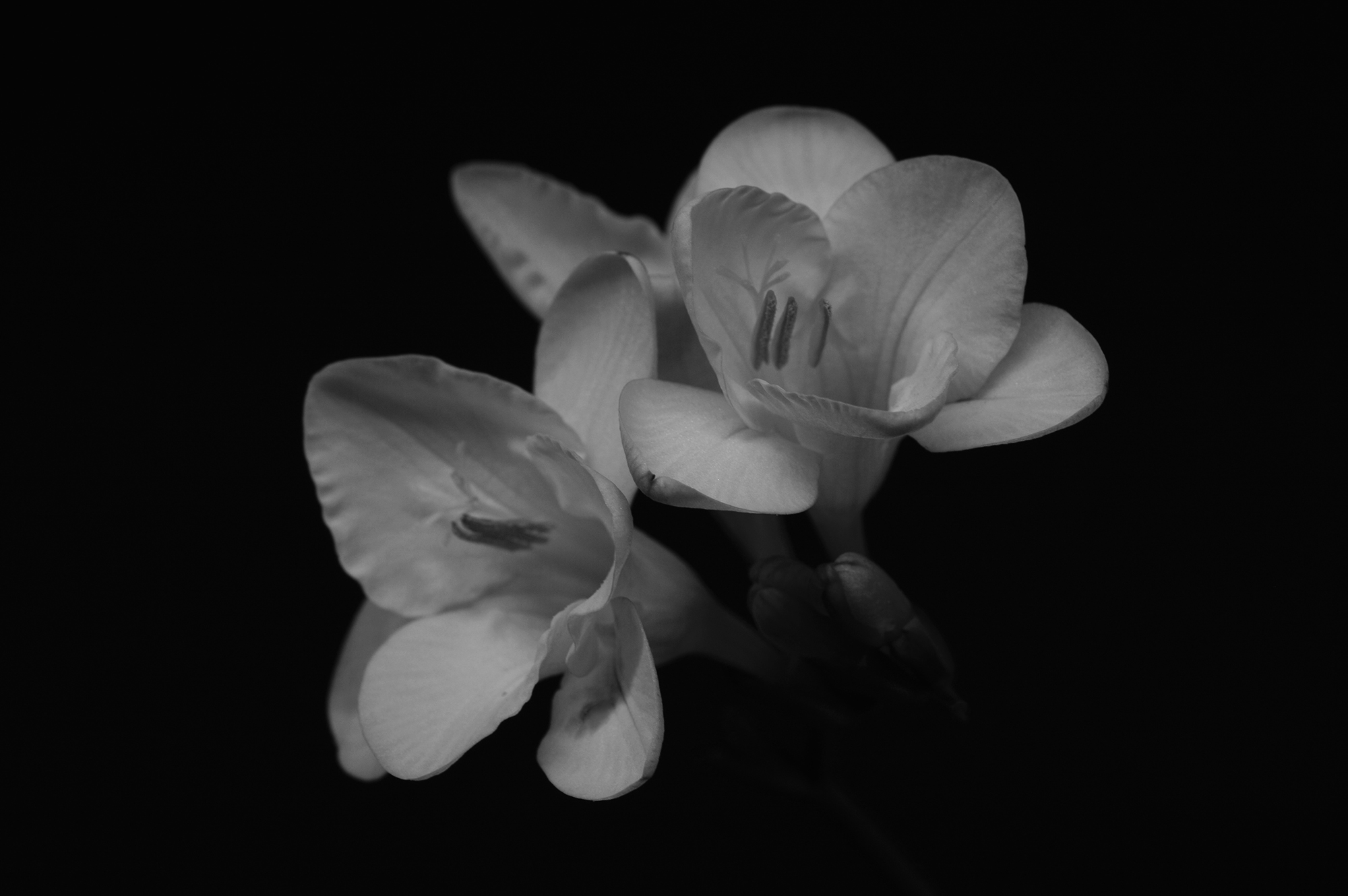 Next up, I tried the white background. This didn’t work as well as the black, mostly because the flowers are quite light themselves. When post-processing I switched them to black and white also and I think that was perhaps the best way for this background! 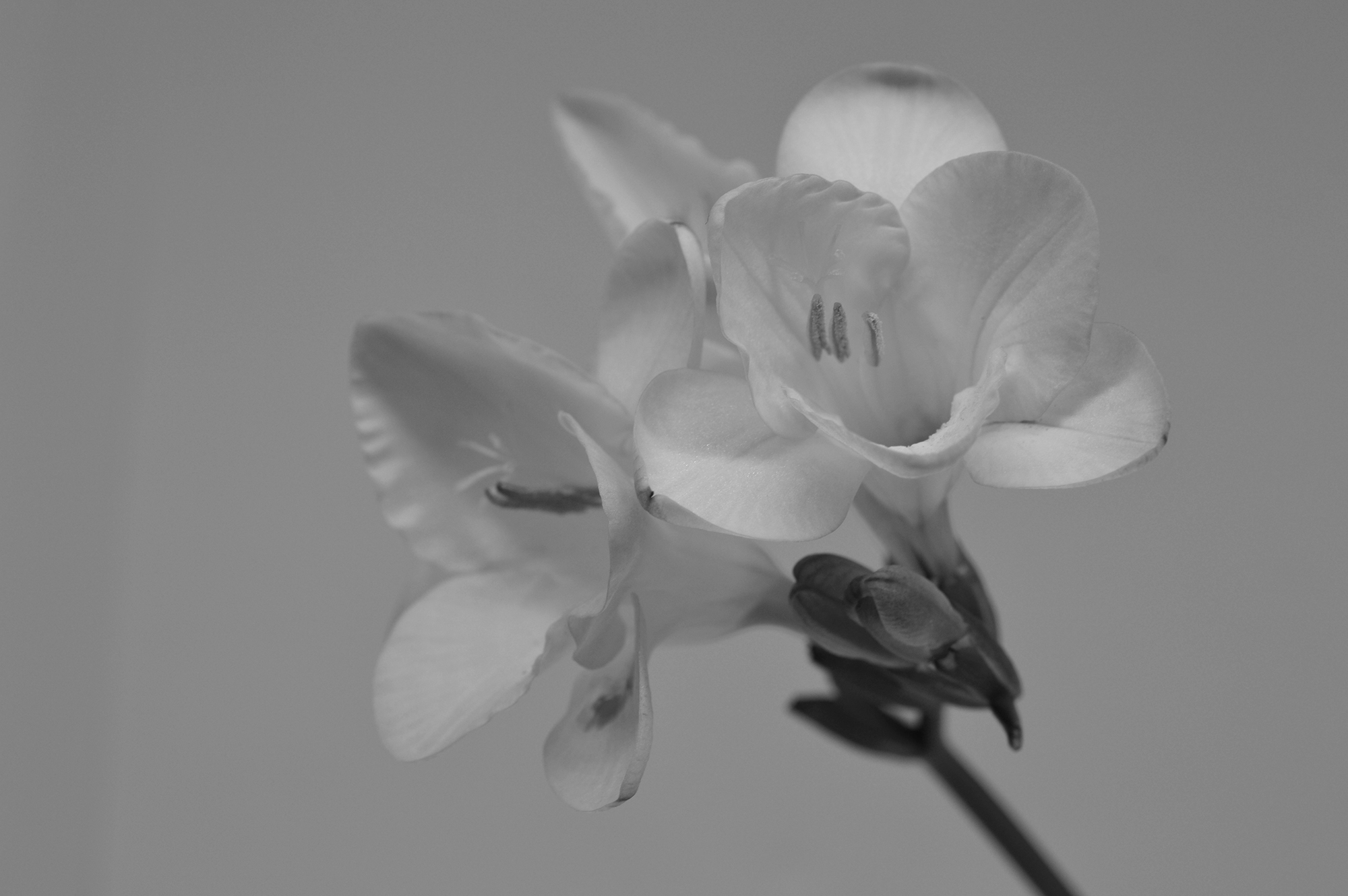 When it comes to the freesias, I had to get some photos of these flowers as they’re my Grandmother’s favourite flower! I drew a picture of them last year also, but I’ll be the first to admit that my above photos are a lot better! 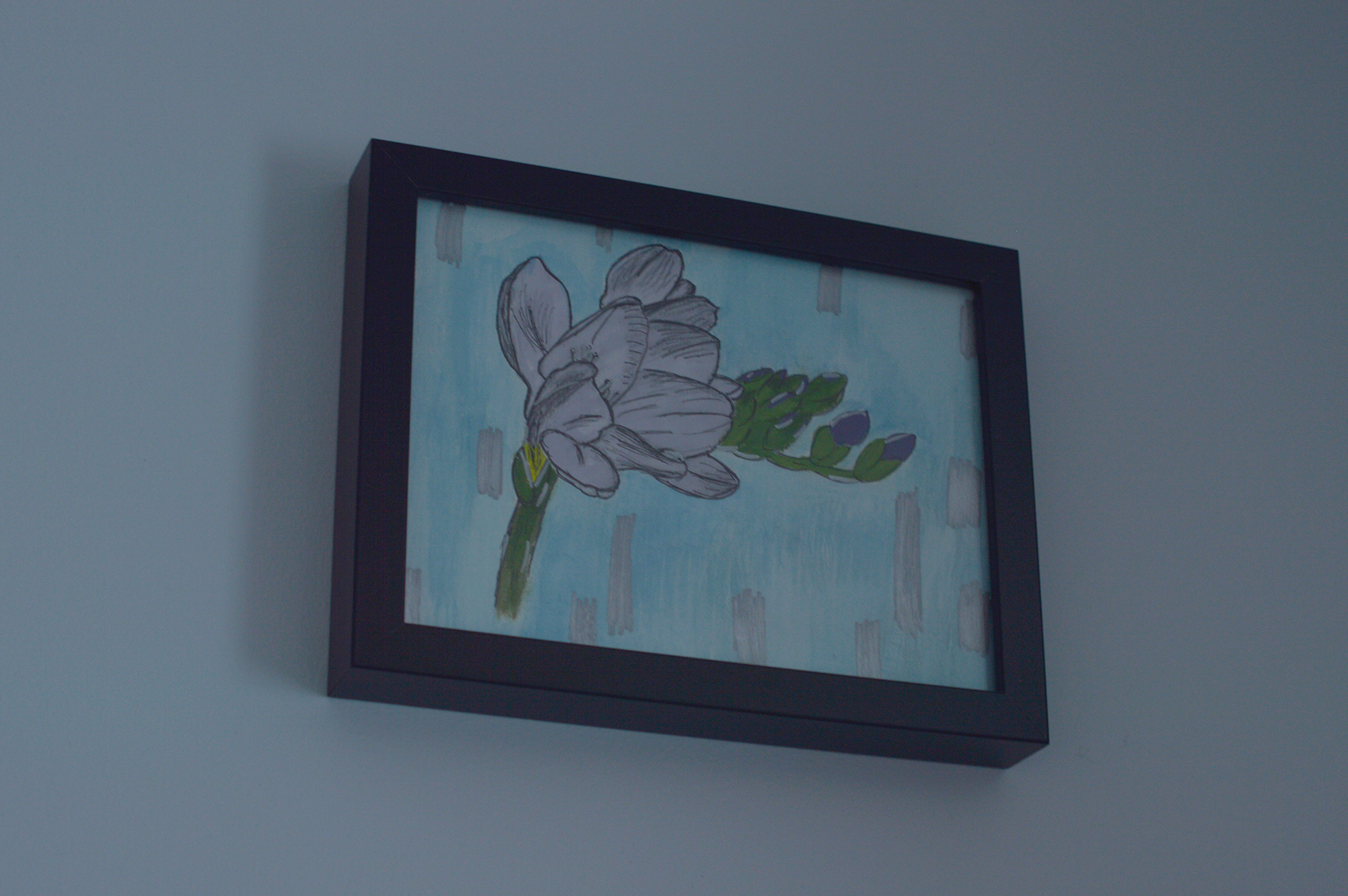 I always get carried away taking photos, so I tried a couple of my dried roses (I dry as many flowers from my boyfriend as I can). First off, a dried pink rose against the white again. I love this in black and white! The rose dried out with so many textures and patterns that it really makes a great impression against the white. 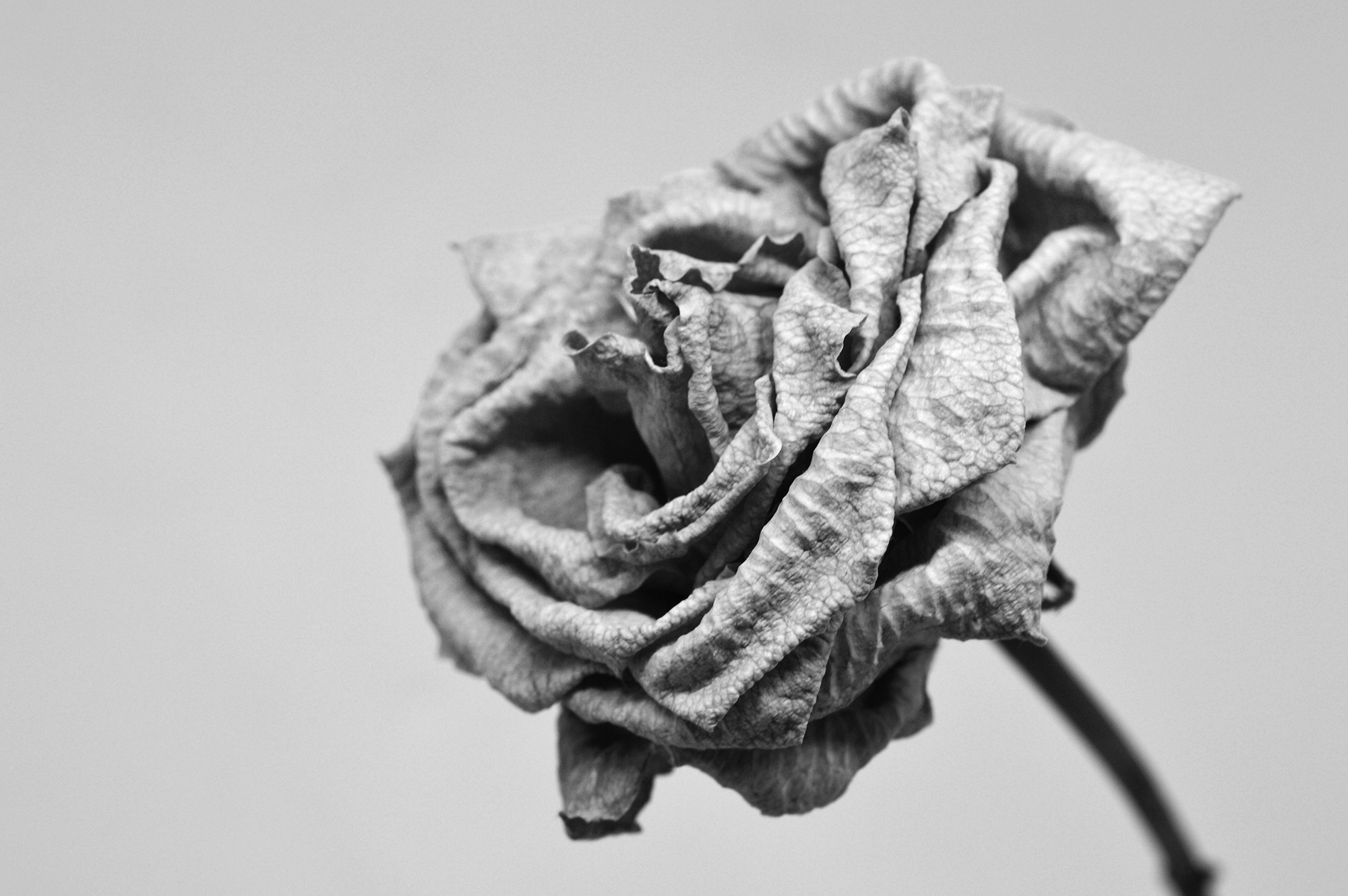 I went back to the black background for the rest of the photos, and also took photos of a dried red rose. The contrast between the two roses is amazing – red roses dry into such a dark colour that it merges with the black instead of standing out, but I still adore the results of all. 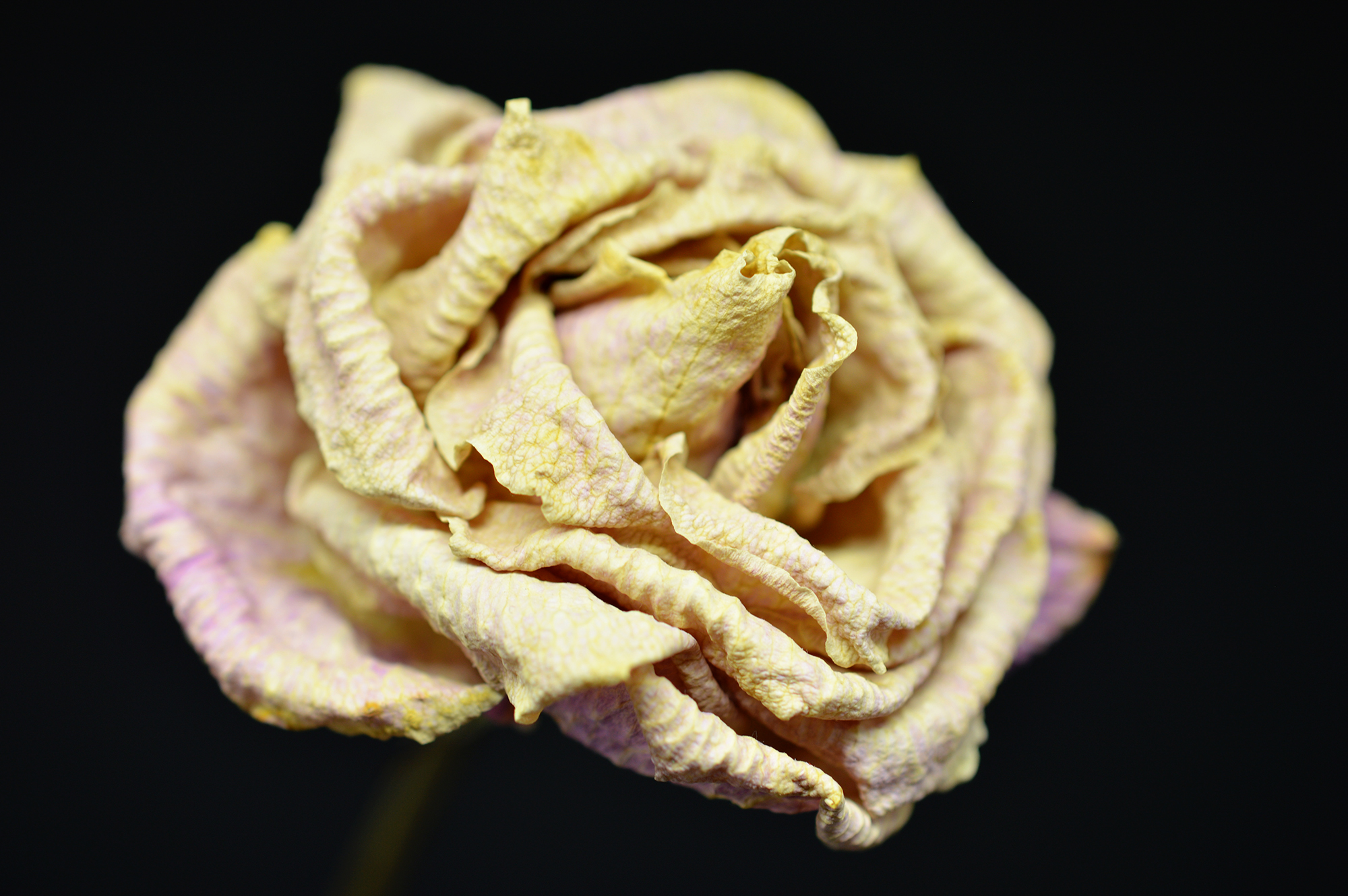 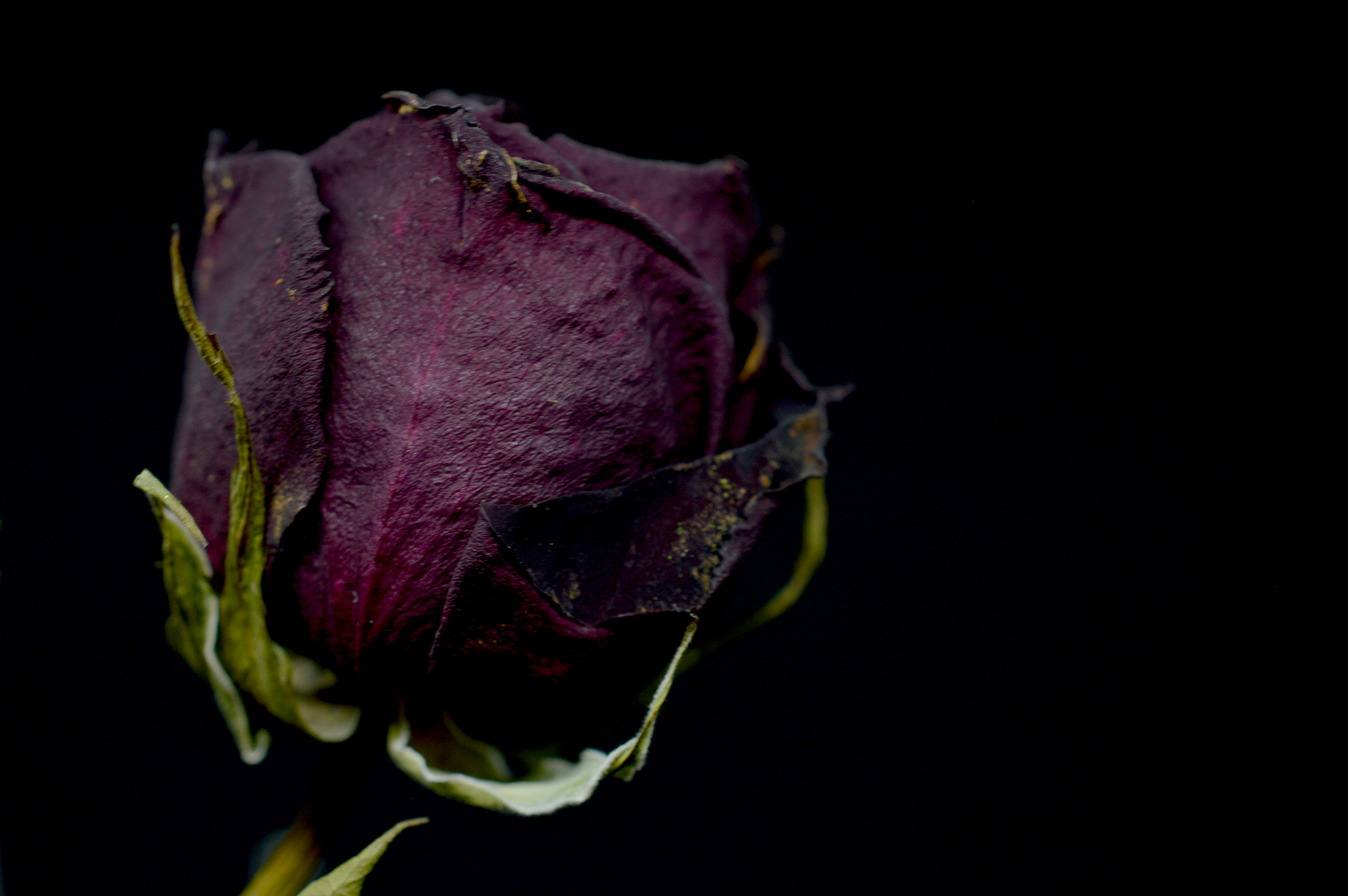 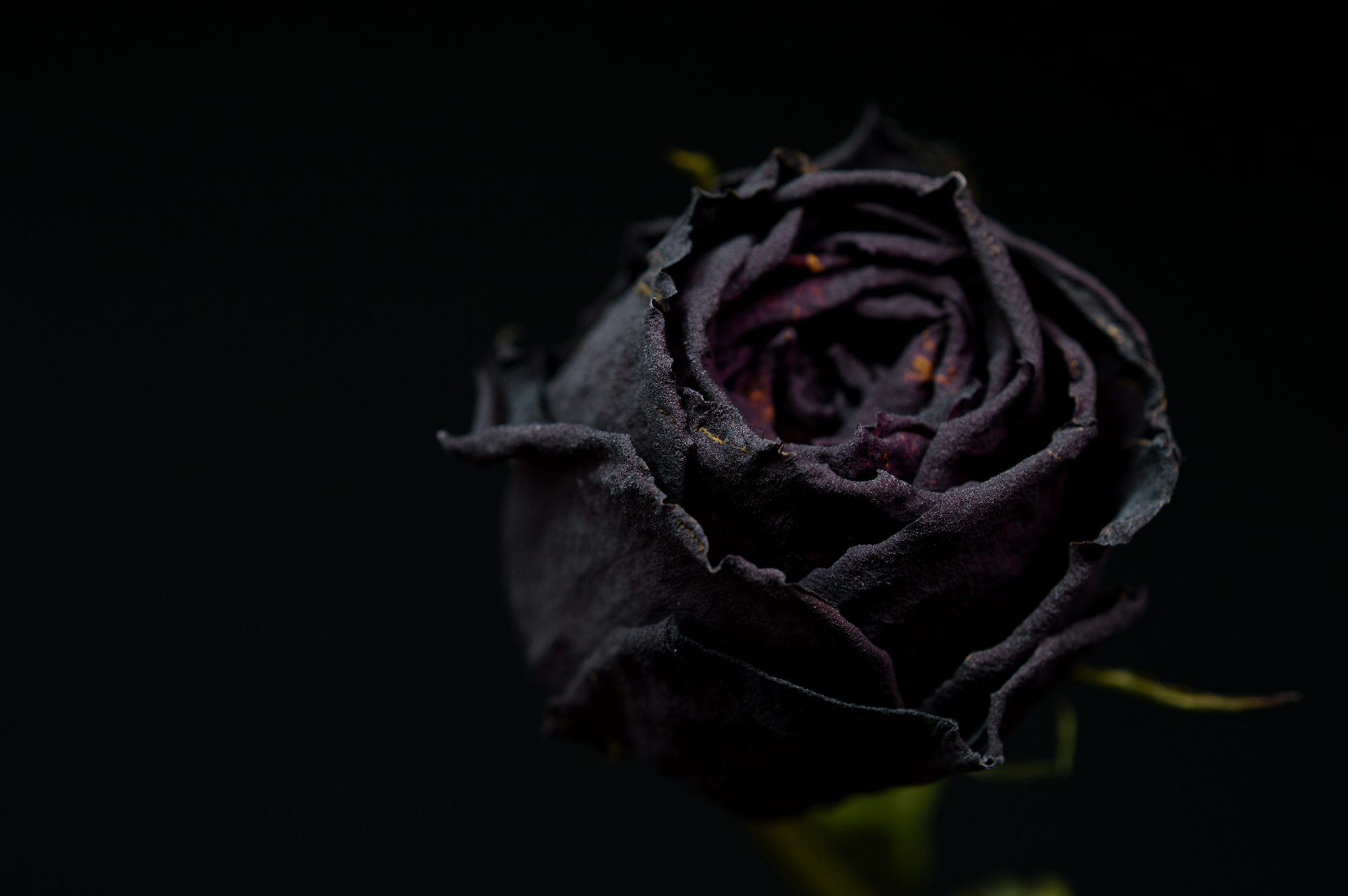 If you’re interested in viewing more of these, take a look at the gallery here. Later today I’ll also be adding a couple of the photos to my Redbubble Store, and I’ll be writing a post on my thoughts of that soon!