It’s a NetGalley review for today! I actually saw a lot of people talking about The Feed on Twitter following the Headline New Voices event in Manchester, and so when I saw it available for request on NetGalley I jumped for it because of the hype. 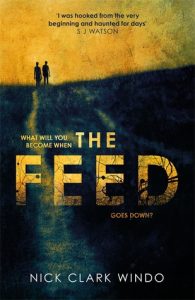 ‘THE FEED by Nick Clark Windo is a startling and timely debut which presents a world as unique and vividly imagined as STATION ELEVEN and THE GIRL WITH ALL THE GIFTS and explores what it is to be human in the digital age.

It makes us. It destroys us.

The Feed is everywhere. It can be accessed by anyone, at any time. Every interaction, every emotion, every image can be shared through it.

Tom and Kate use The Feed, but they have resisted addiction to it. And this will serve them well when The Feed collapses.

Because how do you find someone in a world devoid of technology? And what happens when you can no longer trust that your loved ones are really who they claim to be?‘

Bar The Hunger Games trilogy, I’m quite a newbie when it comes to dystopian books. The idea that this book seems based on is essentially humans getting far too carried away with digital innovation. This results in them pretty much having technology implanted in them, connecting the whole world. What made this even more of a thriller for me is just how plausible it could be, I’ve included a YouTube video down below which I guess explains why I think it’s possible in the future.

At first it took a while for me to get into this story, I wanted things explained a lot quicker as I found myself very confused for the majority of the start of the book. The more things are explained though the easier it is to follow, and the more interested I became in the story also. In terms of the characters, I struggled to really connect with most of them. I think that the beginning confusion stopped me really from being able to connect with Tom, as when it changed to Kate’s POV I felt I connected with her but this was after things had been explained in a lot more detail. It’s very difficult to talk too much about the story and characters because uncovering the secrets adds so much to both, and I’d hate to give too much away!

Structure wise, there are two points of view used in different chapters – that of Kate and Tom. At times though the time lines seemed messy and confusing, in some chapters it was slip from past to present and I felt like it was hard to keep track at times. The ending has so many revelations though that I felt like I’d been on an emotional rollercoaster by the end of it. The world building is incredibly descriptive, so you do really feel immersed in the story even with the confusing elements.

So, this was definitely a different kind of read for me but I actually really enjoyed it in the end, and even better is that it gets you thinking about innovation in a different way. If you’re wanting a thrilling read which will make you think about the future, this is an awesome book for that!

The below short film is actually one which I watched as part of one of my Digital Marketing modules, and the idea is scarily similar to that of The Feed and equally worrisome overall.