I saw this a lot towards the end of last year and I was really interested in reading it thanks to the cover and title (runes, magic, I’m sold). Naturally, when it came on NetGalley I requested it as soon as possible! It didn’t disappoint, I really loved the dark story with the magical elements and with it being kind of a fantasy dystopian it was even more intriguing! 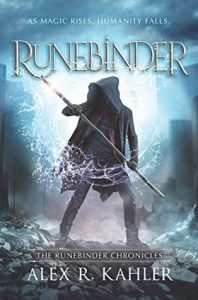 When magic returned to the world, it could have saved humanity, but greed and thirst for power caused mankind’s downfall instead. Now once-human monsters called Howls prowl abandoned streets, their hunger guided by corrupt necromancers and the all-powerful Kin. Only Hunters have the power to fight back in the unending war, using the same magic that ended civilization in the first place.

But they are losing.

Tenn is a Hunter, resigned to fight even though hope is nearly lost. When he is singled out by a seductive Kin named Tomas and the enigmatic Hunter Jarrett, Tenn realizes he’s become a pawn in a bigger game. One that could turn the tides of war. But if his mutinous magic and wayward heart get in the way, his power might not be used in favor of mankind.

If Tenn fails to play his part, it could cost him his friends, his life…and the entire world.’

Runebinder is a book I had my eye on for a while before seeing it on NetGalley fairly recently, and I’m so glad I requested it! I’ve always loved the cover, it’s just so dark and magical I think that’s why I felt so drawn to it. Essentially, it’s a dystopian fantasy, set in our world (USA) after a few magical changes. It has a special touch of lots of diversity so if you’re after a fantasy with lots of diversity in it especially then check it out!

Diversity is mostly from the main character being a gay male called ‘Tenn’, there isn’t any kind of explanation about it which I personally love as I don’t think anyone should have to explain why they feel how they feel. It’s a nice touch for the focus to be on the fantasy elements and story itself. One thing I’ll note about the diversity though is there was one case of homophobia in the form of signage, I think it was to make a group of people seem worse but honestly I feel it could have easily been left out? It’s only a small paragraph at the most but just as a warning…

One particular secondary character was my absolute favourite character in the story – Dreya. She has a twin called Devon but I don’t have much to say about him as honestly he rarely spoke throughout. There was a lot of focus on how Dreya cared for him though and she was just such a strong character that she could have easily been the main character. Initially I cared a lot more about her character than Tenn but as the story progresses he matures along with it and eventually I did find myself not quite as annoyed by him. He’s quite a whinging character at the beginning yet seemed to care little about people dying at the same time – which made me dislike him a little.

For the magic itself! People have essentially uncovered magic and within a short time some have taken to using it for evil means by creating monsters like ‘Howls’ and destroying the world as it was. As you might be able to imagine based off the title and cover alone, there’s a lot of elemental and rune magic involved. Essentially, they discover magic by realising how to use the runes to trigger it.

Considering this is a young adult book, this has a lot of swearing in it, along with a lot of violence and killing. So I definitely would not recommend this for those on the younger side of the young adult age range. Having said that, for anyone around 17 and above it’s a great read if you’re a lover of dark fantasy, and the way that the runes and magic are tied in with a post-apocalyptic story certainly makes for an intriguing read. There’s actually currently a short story available on Kindle which follows the events, I can’t wait to get round to reading that but I’m praying for more of Dreya being in the story still after this read! 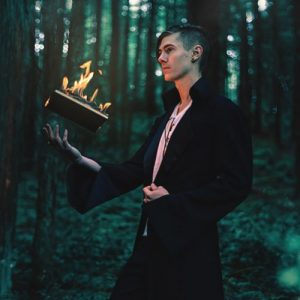 ‘Alex is many things, but first and foremost, he’s a Sagittarius.

In the past few years he’s taught circus in Amsterdam and Madrid, gotten madly lost in the Scottish wilderness, drummed with Norse shamans, and received his Masters in Creative Writing from Glasgow University. And that’s the abbreviated list.

He is the author of THE RUNEBINDER CHRONICLES, THE IMMORTAL CIRCUS, THE PALE QUEEN, and RAVENBORN.‘

Book Review | Kingdom of the Wicked by Kerri Maniscalco
October 22, 2020