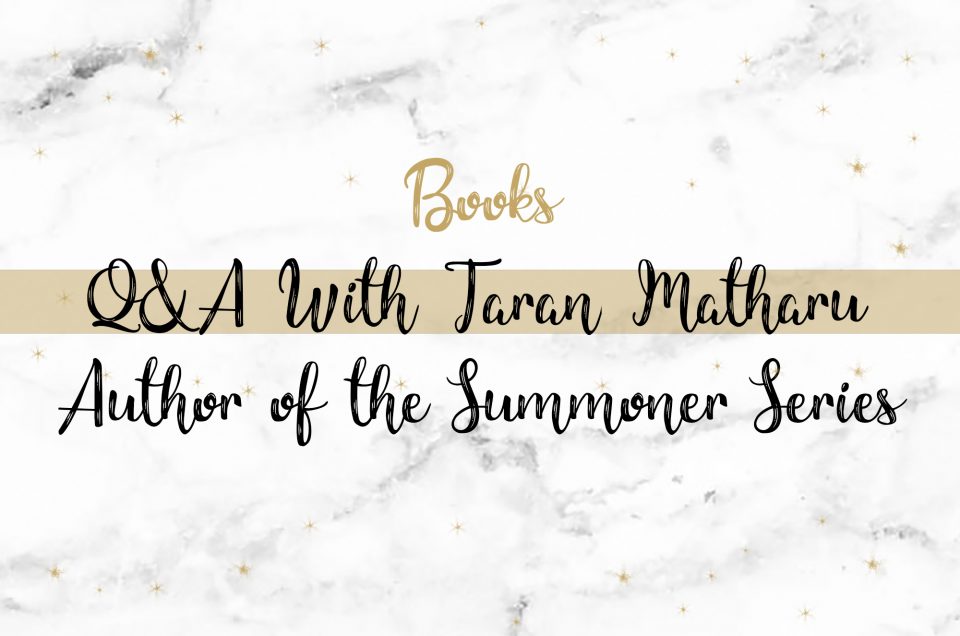 Hey everyone! I’m back to blogging (finally) and with a post that’s something new for me – a Q&A with author Taran Matharu! Major thank you to Northern YA Literary Festival for arranging this, I’m so excited for the event next month where I’ll get to meet Taran in person and get my books signed!

Hello! So, I’ll confess that as of yet I’ve only actually read The Outcast (Summoner #4), but I love the world you’ve created and I can’t wait to continue the series! The first thing that stands out to me is the way that the demons are so similar to Pokémon, in the sense that they’re loyal to their summoner and can be kept safe in a scroll. Does this stem from a childhood love of Pokémon?

Absolutely! My favourite Pokémon was Charmander and I played the Gameboy Colour games incessantly. I also traded the cards and watched the TV show.

One thing I loved about The Outcast was seeing the personal journey of Arcturus, and how he matured throughout. Now, I know that Arcturus is a character from the original books, did you always want to explore his character more or did this develop through the writing journey?

I always wanted to explore his character, or at least the history of the Summoner world through his eyes. In many ways, Arcturus’s life set most of what happened in the main trilogy in motion, much like The Hobbit does for The Lord of the Rings.

Next, this is something I’ve been dying to know since reading the book, there were a couple of times when we saw characters attempt to be sexist or ageist and then be quickly put in their place, was the purpose of this to show Arcturus’ journey or was it for another reason?

I don’t like to preach to my readers, nor are they some kind of lesson, but I do like to hold up a mirror to society with my stories and let them draw conclusions from them if they wish. I think those themes would absolutely exist in any other world with humans, or it would be a pretty warped mirror!

Back to the demons, my personal favourite has got to be the canid, particularly Arcturus’s Sacha! Do you have a favourite demon? Which demon would you want to summon if you could and why?

If you read the later series, you will discover Ignatius, Fletcher’s Salamander demon. He’s my favourite, although many people love Solomon the Golem too! That being said, if I had to choose a species, it would be a Griffin, half eagle, half lion. Imagine flying into work on one of them!

There were so many action scenes in The Outcast, and some really had me on the edge of my seat worried about the summoners and their demons! Without giving too much away, of course, which was your favourite scene to write?

I loved writing scenes where the shield wall was used. I’ve been inspired by the warfare of history, be it from the Viking shield castle or the Spartan phalanx. I had a lot of fun putting my own twist on how the shield wall works in the Summoner universe.

You started writing the Summoner series through Nanowrimo 2013, was that your first time taking part in Nanowrimo, or did you have any other ideas that you’d written about prior to coming up with the Summoner?

I had written a post-apocalyptic alien invasion story, but that was never completed and I started it a touch too young to consider it good enough for publication. This was not written for NaNoWriMo though. NaNoWriMo 2013 was the first time I participated, but not the last!

Do you have any advice for someone hoping to take part in the next Nanowrimo?

Work out a target word count and divide it by the number of days you want to complete it by. Scrivener is a great writing program that does this automatically for you, recalculates on a daily basis and illustrates the stats for you in a cool infographic. It even allows you to take weekends off.

It’s easy to lie to yourself, especially when you come back home after a long day and there’s something good on TV. My advice is to announce your goal to the world, be that on social media or to family and friends. Update your progress as you go, so you’re held accountable if you skip a day or fail to meet your target. It’s rather like running a marathon. You can’t say you’re going to do it and then chicken out, right?

For me, this was a very important factor. There is nothing more encouraging than feedback on your work. What is usually a solitary activity becomes social and you look forward to hearing others’ thoughts. It’s a great reward and affirms that your story is one people enjoy reading. I found Wattpad was a great place to find these readers, but family, friends and colleagues can be just as good – if a little biased!

It sounds a little crazy, I know, but hear me out. Getting the words down is far more important and it’s easy to get bogged down in retouching what you’ve already written. A caveat is giving it a quick read through before the beta reader stage, for typo-correcting purposes only.

Inevitably, there will be days where you’re just not in the mood. The solution, at least for me, is to tell yourself that you’re only going to write a few sentences rather than skipping a day. Open up the manuscript and start writing. You will be shocked at how quickly you are pulled back in and the words mount up. Sometimes I go well above my daily target when starting like this. Even if you don’t, something is better than nothing, right?

This is a trick that has served me well. It’s always easier to continue on a half-finished sentence or scene, allowing you to easily pick up where you left off the next day. Equally, if I finish a chapter, I always make a start on the next one while the writing juices are flowing. That way, I don’t start my next session staring at the blank page of a new chapter.

We all write differently; some of us are plotters, some of us just wing it. But when you’re writing so much so quickly and are trying to hit a word count, it can be easy to write yourself into a corner or fill your manuscript with pointless descriptions as you flounder for what happens next. I’m not suggesting you plan out the entire novel, but it can be good to have a rough structure first, so you know in which direction to take the story.

Finally, if it’s becoming a chore, don’t be afraid to rethink the direction your plot is going in to spice things up for you. If you’re getting bored and losing interest in your own story, the same can easily happen to the person reading it!

Okay so, finally, your next series sounds brilliant! The description on Goodreads talks about another world… and one with prehistoric animals nonetheless! Does this mean we’ll be seeing dinosaurs in this other realm? Regardless, I’m excited to read it after that awesome synopsis!

You absolutely will! Check out this concept art for the new series:

As mentioned this interview was made possible thanks to the organisers of the Northern YA Literary Festival, and you may have seen my previous post a couple of months back for the last event, which was awesome.

Tickets for the Northern YA Literary Festival July event are still available, they’re free and you can find them here.

Northern YA Literary Festival | The Supernatural and Fantastical
August 19, 2018