Ash Princess is the story of a princess, Theodosia, trying to regain her country from conquerors who have humiliated her for years. It was a dark story which was full of strong characters with great world-building and my only regret is that I didn’t read it sooner. 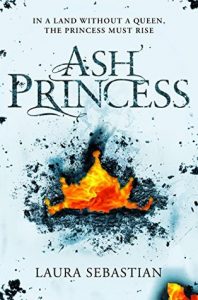 ‘Theodosia was six when her country was invaded and her mother, the Queen of Flame and Fury, was murdered before her eyes. Ten years later, Theo has learned to survive under the relentless abuse of the Kaiser and his court as the ridiculed Ash Princess.

When the Kaiser forces her to execute her last hope of rescue, Theo can’t ignore her feelings and memories any longer. She vows revenge, throwing herself into a plot to seduce and murder the Kaiser’s warrior son with the help of a group of magically gifted and volatile rebels. But Theo doesn’t expect to develop feelings for the Prinz.

Forced to make impossible choices and unable to trust even those who are on her side, Theo will have to decide how far she’s willing to go to save her people and how much of herself she’s willing to sacrifice to become Queen.

If you read my reviews regularly it’ll be no surprise that I really enjoyed this book. A morally grey main character who wants to make things better is always going to be a winner with me!

Theodosia’s home, Astrea, was invaded when she was only a child and she was forced to watch them murder her mother, the Queen, in cold blood. If that wasn’t bad enough, she’s then humiliated and subjected to torture for 10 years under the “care” of the conquerors. They torture her to the point that they want her to forget completely who she is, and in mockery to her heritage (being said to be descended from the Fire God) they make her wear a crown made of ash to events and call her the ‘Ash Princess’.

Naturally, you’ll hate the majority of people in this story. Theo is bullied, tortured and generally treated horribly, she’s even watched 24/7 by three of the Kaiser’s guards. But Theodosia’s character development from a brainwashed prisoner to rebelling queen is fantastic to read about. She gains some moral support from fellow Astreans, including a childhood friend/one love interest – Blaise. Theo has another love interest in the story, as she woos Prinz Søren. I loved his character also, his character developed alongside Theodosia’s for the most part and I definitely preferred him as a love interest to the more “sensible” choice of Blaise.

Theo plays a dangerous game throughout the story and it’s more than enough to keep readers entertained. You’ll wonder alongside her whether she can trust those closest to her after she’s become close to some who are her enemy, but more than anything else you’ll be eager for her to stand up to those bullying her. I would have given this 5/5 stars, but I’ve gone for 4.5 simply because I found it kind of hard to get into. The beginning is very heavy with traumatic events but it definitely helps you to understand just how cruel Theo’s world has become under the rule of the Kaiser.

I’ll definitely be reading the next instalment, Lady Smoke, as Ash Princess ended on such a cliff hanger that there’s no way I couldn’t and I’m genuinely excited to see if Theo will regain her rightful title as Queen and take back her home from the Kaiser.

I’m so glad to see that other people have enjoyed this book as much as I did! I think you’re comment about hating most of the characters is spot on – that’s definitely how I felt about the book. Great review!

Definitely, but I was so glad that Theo was such a strong character that she persisted through! Thank you 🙂

yes!
i really enjoyed this book too, great review 🙂

Thank you! I hope she has a UK tour soon so we can meet her 😀