When I was preparing to go to YALC one of the things I was most excited for was the chance to win an ARC of What If It’s Us, I really wanted to read it as soon as possible. If you bought a book from the Hashtag Reads stall then you stood a chance at winning a copy, and on the Monday after I got home I received an email saying I’d won one!

What If It’s Us didn’t disappoint in the slightest. It was remarkably cute from start to finish and full of both platonic and romantic relationships. I loved it, and honestly I don’t think there was a chance that I wouldn’t since it was the result of two amazingly talented authors, but still! 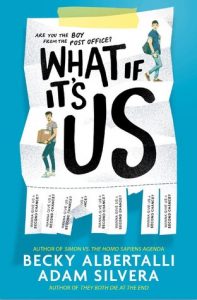 I’d read one each of Becky and Adams’ books prior to What If It’s Us – Simon Vs The Homo Sapiens Agenda and They Both Die At The End. Honestly, in terms of story content What If It’s Us is the perfect mix of both authors’ styles. They Both Die at the End was brilliant but it crushed my heart and left me in tears, I just didn’t want the expected to actually happen; then Simon Vs is a cute little romance where the main character finds his perfect guy and it’s pretty smooth sailing once he finds out who Blue is (you can easily imagine that they’re together forever).

What If It’s Us is a story where you just find yourself nervous in a will they/won’t they way because essentially Arthur, who’s only in New York for the summer, bumps into Ben and the beginning explores their backgrounds whilst Arthur is desperately trying to find the cute “Box Boy” who’s name he didn’t manage to get.

Timing for them both isn’t great, Ben has just recently been through a break up and Arthur is pretty much the mega-jealous-no-cool-type of person. But they have this sweet relationship form and even though there are times when your heart will break a little there’s still an overwhelming amount of hope behind it for both of them and the friendships they have (which are heavily featured throughout also).

The friends we meet are all hands down pretty cool but my favourite was most definitely Ben’s best friend, Dylan. He’s a super coffee-obsessed guy who’s massively over the top and his friendship with Ben is adorable. The friendship is completely platonic and he’s hetero (with a long history of ex-future-wives) but he’s just so cool about everything like he and Ben keep clothes at each other’s and tell each other everything and they just have the sweetest of bromances!

Dylan starts a relationship at the beginning with Samantha who is seriously adorable, she’s working in a coffee shop at the time so that definitely adds to the cuteness of her and Dylan. But she’s there for Ben from the beginning too and tries to help him track Arthur down as well.

Arthur’s interning at his mom’s lawyer firm over summer and becomes pretty good friends with the two girls interning there – Namrata and Juliet. They’re also two very cool characters and try to help Arthur find Ben (I know I’m saying that the characters are cool/adorable a lot but… they are, there’s no getting around it).

Ben’s spending his summer in summer school which puts him in a very awkward situation as two of his former closest friends – which includes his ex-boyfriend and Dylan’s ex-girlfriend – are also having to take the classes. He’s clearly struggling being around Hudson but a lot of it is that he’s trying to figure out his own thoughts and feelings about what happened between them. Harriet, Dylan’s ex, is clearly struggling because she wants to be friends with Ben but I guess she feels more obliged to be there for Hudson.

And then there’s Arthur’s friends back home – Jessie and Ethan. Arthur’s scared because Ethan hasn’t treated him the same since he came out, I can’t say more but eventually everything gets sorted and they are both there for Arthur, constantly messaging and FaceTiming him when they’re together to try help whenever they can and to hear about Ben.

The setting of New York is perfect owing to all of the Broadway references (Arthur is a huge fan of Hamilton in particular) and I guess it helps make the story feel all the more bigger and magical. A lot of the story centres around Arthur and Ben whilst they go on a few dates but both find themselves struggling – which isn’t helped by Arthur only being in the City for the Summer.

I had one issue with this story overall… it ended. The ending was perfect, don’t get me wrong, I just didn’t want it to end. If Becky and Adam write more collaborations, I’ll be snapping them up just as quickly!

“I guess that’s any relationship. You start with nothing and maybe end with everything.” 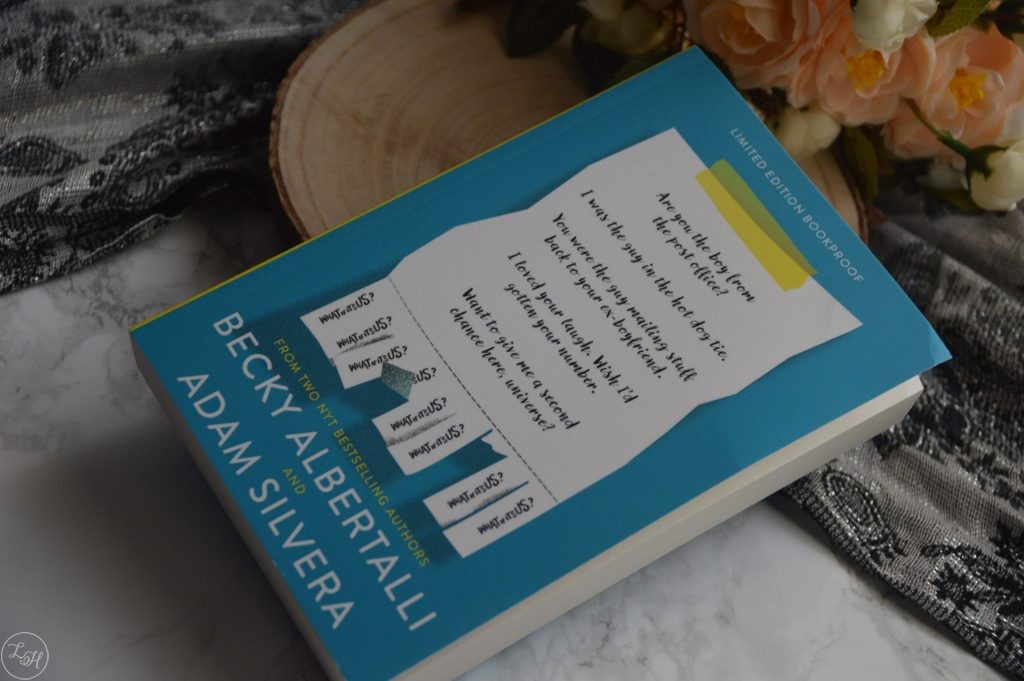 In case you haven’t seen yet, Becky and Adam will be at an event in Manchester and an event in London next month!

Tickets will be £14 which includes entry, a copy of What If It’s Us and a poster, general admission is £6.

There will be a signing after, with a limit of getting What If It’s Us and one other book by each author signed. I’m attending the Manchester event, I actually booked my ticket way in advance of reading the book but I’m even more excited for it now!