When I saw the synopsis for The Rogue Queen originally on NetGalley, I was so excited by it that I had to request it! The first of the series – The Hundredth Queen – was on offer on Kindle then for 99p so I bought both the books leading up to The Rogue Queen (which is third in the series). Prior to reading the series, I have to admit I’ve never read a book with a religion based on a non-western religion before – but due to having an interest in many different cultures this just made me more intrigued to read it.

A review of the final book (so far, there’s another coming thank god) wouldn’t make too much sense without the prior reviews, so I’ve included reviews for the first and second in the series also. But just to be clear I did purchase those two – only the third was an eARC from NetGalley. 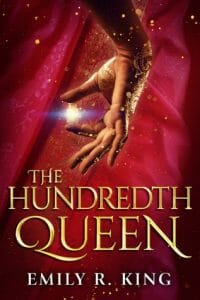 ‘He wanted a warrior queen. He got a revolutionary.

As an orphan ward of the Sisterhood, eighteen-year-old Kalinda is destined for nothing more than a life of seclusion and prayer. Plagued by fevers, she’s an unlikely candidate for even a servant’s position, let alone a courtesan or wife. Her sole dream is to continue living in peace in the Sisterhood’s mountain temple.

But a visit from the tyrant Rajah Tarek disrupts Kalinda’s life. Within hours, she is ripped from the comfort of her home, set on a desert trek, and ordered to fight for her place among the rajah’s ninety-nine wives and numerous courtesans. Her only solace comes in the company of her guard, the stoic but kind Captain Deven Naik.

Faced with the danger of a tournament to the death—and her growing affection for Deven—Kalinda has only one hope for escape, and it lies in an arcane, forbidden power buried within her.’

I’d rate this more like 4.5 as I did really love it towards the end but originally the relationship between Deven and Kalinda feels forced, and really it isn’t until the story unravels that you get any idea of why they might have been attracted to each other.

Having said that, what starts out as a world where mostly women are treated as inferior to men becomes a story where the focus is on sisterhood and an altogether uplifting start to a series. I definitely feel like it progressed by getting much better and the additional characters introduced also really helped to show the true character of Kalinda, the main character.

I really enjoyed the world building also, the introduction of gods and a different kind of culture to any I’d read about previously. 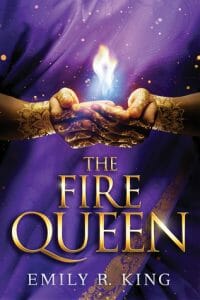 ‘In the second book in The Hundredth Queen Series, Emily R. King once again follows a young warrior queen’s rise to meet her destiny in a richly imagined world of sorcery and forbidden powers.

Though the tyrant rajah she was forced to marry is dead, Kalinda’s troubles are far from over. A warlord has invaded the imperial city, and now she’s in exile. But she isn’t alone. Kalinda has the allegiance of Captain Deven Naik, her guard and beloved, imprisoned for treason and stripped of command. With the empire at war, their best hope is to find Prince Ashwin, the rajah’s son, who has promised Deven’s freedom on one condition: that Kalinda will fight and defeat three formidable opponents.

But as Kalinda’s tournament strengths are once again challenged, so too is her relationship with Deven. While Deven fears her powers, Ashwin reveres them—as well as the courageous woman who wields them. Kalinda comes to regard Ashwin as the only man who can repair a warring world and finds herself torn between her allegiance to Deven and a newly found respect for the young prince.

With both the responsibility to protect her people and the fate of those she loves weighing heavily upon her, Kalinda is forced again to compete. She must test the limits of her fire powers and her hard-won wisdom. But will that be enough to unite the empire without sacrificing all she holds dear?’

First off, I need to say that I enjoyed this book so much more than The Hundredth Queen (even though I thought that was also pretty good, towards the end especially). I feel like the author was working up to it throughout the first book but honestly this one blew me away.

Right from the start there was drama and I was enticed straight away by it, I also love the way that different chapters are from Kali and Devens’ points of view! Introducing Prince Ashwin to the series also was so interesting to compare him to his father. The other new characters and the introduction of different areas and customs was fascinating to read about and I think the world building just gets amazing in this book.

There are a lot more “good” bhutas – elementals in this world – introduced also in this book which makes the story naturally one which has more drama and action than the previous. 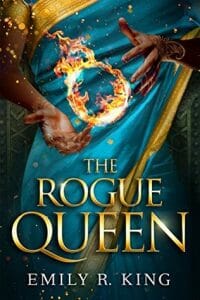 ‘Despite the odds, Kalinda has survived it all: Marriage to a tyrant. Tournaments to the death. The forbidden power to rule fire. The icy touch of a demon.

That same demon now disguises itself as Rajah Tarek, Kalinda’s late husband and a man who has never stopped haunting her. Upon taking control of the palace and the army, the demon brands Kalinda and her companions as traitors to the empire. They flee across the sea, seeking haven in the Southern Isles.

In Lestari, Kalinda’s powers are not condemned, as they are in her land. Now free to use them to protect those she loves, Kalinda soon realizes that the demon has tainted her with a cold poison, rendering her fire uncontrollable. But the lack of control may be just what she needs to send the demon back to the darkest depths of the Void.

To take back the empire, Kalinda will ally with those she distrusts—and risk losing those most loyal to her—to defeat the demon and bring peace to a divided nation.’

This book completely blew me away, I adored the two stories prior to this but by the end I was in tears through all of the emotion in this book. Right near the beginning when Kali realises the extent to her circumstances she wastes no time to continue as planned and not dwell on the revelations – forever putting her people before her own health. Her character matures even more in The Rogue Queen and she becomes even more of a role model to those younger.

The use of two POVs – Kali and Devens’ – is continued with The Rogue Queen and it serves to further demonstrate the events in a full and detailed way. Prince Ashwin’s character develops further and we see that he has a lot more maturing to do – especially when it comes down to knowing what he should do for the good of his people. He’s riddled with regret throughout due to previous events but he remains to be a far more likeable and noble character than we would expect from the son of Rajah Tarek.

There are a lot of new characters introduced in this book from various parts of the world also – adding to the world building with a range of different cultures and more Bhuta characters. My personal favourite new addition is that of Gemi – from the beginning she is headstrong and quite sassy, I’d love to see more of her in the final book. There’s a return of many characters from the first two books also, and it really helps to establish a connection with a lot of them.

I’m so glad there’ll be another story to this wonderful world, I don’t think 3 books would be enough for me! Having read this story in the series also I’d love for even more books from different characters backstories and prequels and everything… (I can hope, right?)

Have you read The Hundredth Queen series yet?
Feel free to leave a comment or tweet @LuchiaHoughton about your thoughts!