Book Review | A Treason of Thorns by Laura E. Weymouth

Book Review | A Treason of Thorns by Laura E. Weymouth

Today’s book review is another FFBC blog tour post for A Treason of Thorns by Laura E. Weymouth. This was an enchanting read with a unique magic system within it and a part of me is definitely sad it’s a standalone only!

The story has great characters and is an intense read from start to finish, full of treason and important friendships throughout. 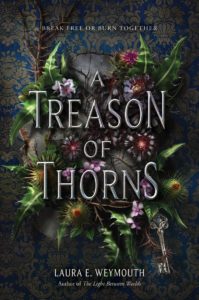 Title: A Treason of Thorns
Author: Laura E. Weymouth
Publisher: HarperTeen (US)
Release Date: 10th September 2019
Pages: 352
Source: eARC provided by the publisher (this in no way affects my review which is honest and unbiased)
Rating:

‘Violet Sterling has spent the last seven years in exile, longing to return to Burleigh House. One of the six great houses of England, Burleigh’s magic always kept the countryside well. And as a child, this magic kept Violet happy, draping her in flowers while she slept, fashioning secret hiding places for her, and lighting fires on the coldest nights to keep her warm.

Everything shattered, though, when her father committed high treason trying to free Burleigh from the king’s oppressive control. He was killed, and Vi was forced into hiding.

When she’s given a chance to go back, she discovers Burleigh has run wild with grief. Vines and briars are crumbling the walls. Magic that once enriched the surrounding countryside has turned dark and deadly, twisting lush blooms into thorns, poisoning livestock and destroying crops. Burleigh’s very soul is crying out in pain.

Vi would do anything to help, and soon she finds herself walking the same deadly path as her father all those years before. Vi must decide how far she’s willing to go to save her house—before her house destroys everything she’s ever known.’

A Treason of Thorns is a magical read, within which Weymouth has created a world where the weather and countryside are at the mercy of the great houses that control them with their own powers.

The book is set mostly within one of these great houses, Burleigh House, and our main character Vi will do whatever it takes to protect it. The houses are all looked after by dedicated caretakers, and Violet comes from a family who have looked after Burleigh for generations. Caretakers are effectively chosen by the monarch at the time and overall they are the ones who have power over the great houses.

The story starts with Violet’s father accused of treason through trying to free Burleigh from the monarch’s hold, and very quickly Vi is cast out whilst her father and [my favourite character] her friend Wyn remain in the house under arrest, with no way of controlling the magic of Burleigh safely.

‘Life isn’t fair, my dear. Some people win and some lose. You must learn to play a better game.’

Slight bit of a whirlwind, but it makes for an intense read from the start.

Violet is every bit the doting, hopeful caretaker of the house but the King has other ideas. He essentially puts her through a task he knows that she’s unlikely to be successful with – getting the house well again after the eventual death of her father but without the key to being able to do so properly.

‘Houses don’t love us, Violet. They obey or disobey, and they use us to their own ends.’

She returns and attempts to give it her best shot though, finding her childhood friend Wyn in the process. Wyn is an adorable character and even though he’s strangely bitter at her when they first meet again he quickly starts to do kind things like sleep outside her room at night to make sure she feels safe. But she notices more and more unusual things about him whilst simultaneously a relationship begins to form.

Other characters we have are Mira and Jed, who helped at Burleigh before the arrest. They take care of Vi for nine years and support her through everything – even returning to Burleigh with her. We don’t see them much after they all return but we’re told a lot about all of the ways they keep caring for Vi, such as by getting jobs. Then there are Esperanza and Alfred, two adorable characters. Both of them help as much as they can with what ends up being Vi’s aim but my favourite scenes were probably any with Esperanza in. She’s a headstrong and feisty character who you can’t help but love, I’m just sad that this will likely be all we see of her.

‘The world is full of men who want things, and never question their right to go after them.’

Although I loved the characters mentioned above, there were villains in this story too, mainly the King and a Lord Falmouth. They’re written well, with the King being almost redeemable at times and Lord Falmouth being the type of person who you’d quite like to slap. But the house itself is sentient and morally grey, it does what it feels is necessary to survive but still feels regret doing things that are wrong – which Vi is able to feel throughout the story.

The story is enriched by recollections of the main characters past also, and whilst a couple of times I did get a bit confused about past and present it did help the overall understanding of the book. I really enjoyed this read and I’m definitely interested in checking out more of Weymouth’s work! 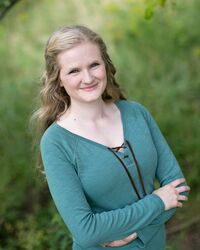 Laura Weymouth is a Canadian living in exile in America, and the sixth consecutive generation of her family to immigrate from one country to another. Born and raised in the Niagara region of Ontario, she now lives at the edge of the woods in western New York, along with her husband, two wild-hearted daughters, a spoiled cat, an old soul of a dog, and an indeterminate number of chickens. She is represented by the inimitable Lauren Spieller of TriadaUS.