I joined another FFBC book tour again, this time because I 100% could not wait for this book. Sara Raasch’s upcoming novel These Rebel Waves is released today and I am so thankful to the FFBC for letting me on the tour because I have a new favourite author. I was dying to read this fantasy because, well, pirates. Check out the full blog tour schedule here for more awesome posts and continue to read on for my review! 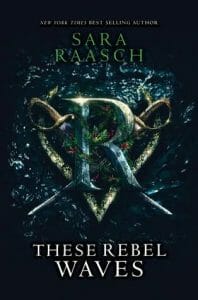 ‘Adeluna is a soldier. Five years ago, she helped the magic-rich island of Grace Loray overthrow its oppressor, Argrid, a country ruled by religion. But adjusting to postwar life has not been easy. When an Argridian delegate vanishes during peace talks with Grace Loray’s new Council, Argrid demands brutal justice—but Lu suspects something more dangerous is at work.

Devereux is a pirate. As one of the outlaws called stream raiders who run rampant on Grace Loray, he pirates the island’s magic plants and sells them on the black market. But after Argrid accuses raiders of the diplomat’s abduction, Vex becomes a target. An expert navigator, he agrees to help Lu find the Argridian—but the truth they uncover could be deadlier than any war.

Benat is a heretic. The crown prince of Argrid, he harbors a secret obsession with Grace Loray’s forbidden magic. When Ben’s father, the king, gives him the shocking task of reversing Argrid’s fear of magic, Ben has to decide if one prince can change a devout country—or if he’s building his own pyre.

As conspiracies arise, Lu, Vex, and Ben will have to decide who they really are . . . and what they are willing to become for peace.’

If you read the opening paragraph, it’ll be no surprise at all that I adored this book, from start to finish. I actually noticed I’d got 40% and started panicking because I didn’t feel like it would be enough for me, and lo and behold I reached the last page and found myself desperately attempting to find more pages which weren’t there (I really hope that the next book is released like… tomorrow. Or at least soon, I might be able to wait a year).

So characters wise, every single protagonist is plain awesome. We get to read from three perspectives (Lu, Vex and Ben) and although I’m usually wary of this for fear of not liking a point of view as much I had no issues with this story because I loved all sides of it. There’s Adeluna – Lu – who is a former child rebel soldier, and straight up you’ll be both in awe of her and simultaneously feel slightly heartbroken because she didn’t get a chance to have a childhood, and you’ll feel angry at her parents for not protecting her better. Nevertheless, five years pass and you see she’s grown into an even stronger, smarter character (who is also a little sassy which personally I adore).

Devereux – Vex – is as the synopsis suggests, a pirate. Imagine a young Jack Sparrow sober but with still with his wits and charm and you’ve got Vex. Unlike most pirates, he and his crew of two others aren’t a part of any of the island syndicates. I’ll get to his crew later though because they, without a doubt, deserve a lot of gushing too. Vex has a typical eye patch which we associate with pirates and a troublesome backstory to go with it but he’s such a charismatic person that you don’t really see it. One of my favourite parts of the story was how his character and Lu’s just bounced off each other with energy, he was in awe of her from the beginning and it was great to see their relationship develop. It was the kind of relationship which was almost hate-love but without the kissing – it felt real.

Prince Benat – Ben – was probably the character I felt almost the most sorry for throughout. I was intrigued by his side of the story from the beginning but I was ridiculously worried that his horrid father might harm him. His father is the King of Argrid and hates magic with a passion, enforcing this hate onto his people by professing magic to be unholy. This forms the backstory for why Lu and Vex’s home, Grace Loray, is so important – it’s a land full of magical botanics and the King wants to rid the world of this “evil”. Ben, however, disagrees with his father from the beginning and wants the people to stop believing that magic is evil.

Now. Vex’s Crew. Nayeli – Nay – and Edda are without a doubt two of my favourite side characters ever and I’d love for spin off novels from their perspectives! Nay is as feisty as Lu, to the point that Vex thinks to himself: ‘Oh god… Did I bring another Nayeli onto my boat?‘ Both Nay and Lu have some pretty fun little conversations too and I only wish we saw even more of their friendship developing. Nay has a huge love for explosive magic too but rather than coming across as crazy person with it she just seems like she’s in her element whilst she uses it, which makes her even more of a fun character. There’s another reason why I found Nay’s character even more awesome but it links with a pretty big part of the plot, so you’ll just have to read it to find out that bit! Edda has yet another tragic backstory but essentially comes across as a lovable “mumsy”-type of character. There were some parts to the book which explored her character more but I’d love to see more of her backstory.

The world created by Sara is pretty dark for the most part, layered in oppression. Politics forms a pretty big part of this story, but it’s explained brilliantly by Sara and really helps with tying the story together in general. In terms of LGBT representation, we get to see an m/m relationship which is a fairly big side story and a former f/f relationship where there are still feelings. I didn’t really get the impression that there were any prejudices towards same sex relationships in the world either, which is a definite bonus to read.

And twists. I love twists, and I especially love twists that I don’t see coming. Obviously I can’t delve much into it because there is no way I could ruin this amazing story for anyone but I DID NOT SEE THE TWIST AND IT WAS AWESOME. I hadn’t read any of Sara’s books before this one, but having read These Rebel Waves I’ll 100% be getting round to the Snow Like Ashes series as soon as I can. However, I am still dying to know what will happen in the next Steam Raiders book; the ending will leave you desperately trying to find more text hidden somewhere. 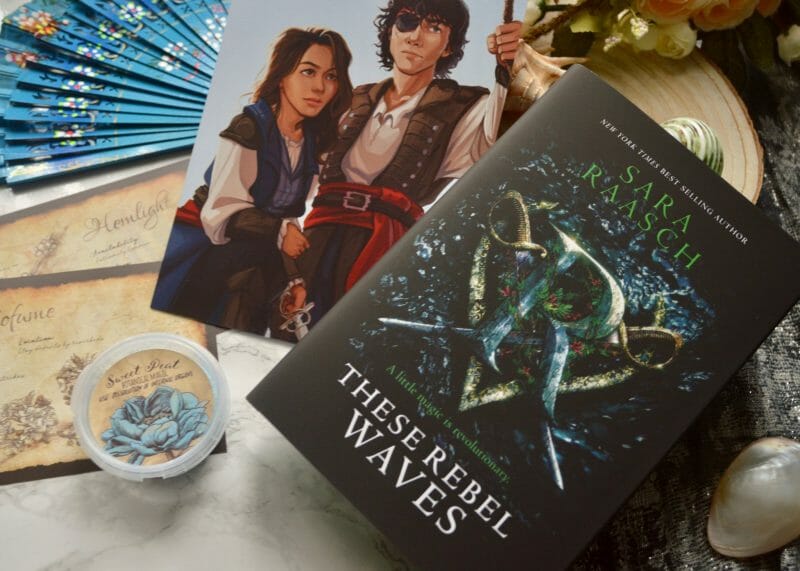 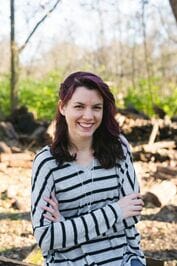 Sara Raasch has known she was destined for bookish things since the age of five, when her friends had a lemonade stand and she tagged along to sell her hand-drawn picture books too. Not much has changed since then — her friends still cock concerned eyebrows when she attempts to draw things and her enthusiasm for the written word still drives her to extreme measures. Her debut YA fantasy, SNOW LIKE ASHES, the first in a trilogy, came out October 14, 2014 from Balzer + Bray. It does not feature her hand-drawn pictures.