On Sunday the 9th of September I attended another TEENSgate event, this time it was a party in celebration of A Sky Painted Gold! I was really looking forward to reading this book, as I’d got an ARC of it back in March at the first Northern YA Literary Festival and it looked beautiful. If you don’t know already, I then had to finish my dissertation off for my Masters and so all my reviews got a little neglected.

But I was determined to read this before the event and am I glad I did because I appreciated the party so much more! A Sky Painted Gold is a 1920s themed story (slightly heavy on the apples) and Kimi’s decorations for the event were just perfect! Kimi also messaged me before asking if I’d like to interview Laura – and considering by that point reading I’d already been giggling and grinning my head off I jumped at the chance to. I’ll be posting the interview later this week along with a review for the adorable story.

Back to the day though! Kimi led the panel with Laura with some really insightful questions, both around A Sky Painted Gold and Laura’s writing career. Laura began by reading out from the prologue, which she said was one of her favourite parts of the book, and interestingly the first line had always been the first line…

‘It all started with an apple.’

One thing which she later addressed though connected to the first line was the amount of research she had to do on apples to make sure it was the right month! She’d actually contacted a specialist on ancient apples to check that she’d set it in the correct month – but this was later taken out altogether (but, for the record everyone, March most definitely was okay for the prologue!)

Kimi asked if she’d always wanted to write a story set in the 1920s also and Laura stated her love for the era, for the dresses, the music, and the way that the timing fit in so well for a coming of age story since the 20s were a time when people didn’t realise there would be another war so soon.

As friendships and family are quite important in the book, Kimi asked Laura if this was intentional. Laura said she’d wanted it to be as even though she wanted to write a romance the focus was on the story being a coming of age one. Another thing I liked about what she said was that with romances it’s kind of an easy way out to have a “bad” woman but she wanted to have supportive women in the story (which is awesome to see).

Also speaking of characters, she prefers to not write character profiles and just let the characters come out through the writing. And there’s a little bit of Laura in all of her characters but she relates most to Lou, the main character. The book also touches upon LGBT and racial issues, which when Kimi asked about Laura said she wanted to include them in the story but with a modern touch as she wanted the story to have a timeless, modern feel behind it.

Kimi went on to ask Laura about books she’d recommend other than The Great Gatsby (which included I Capture the Castle – and Laura said she wanted to capture the voice the main protagonist has in this through A Sky Painted Gold). There was also talk about the process of Laura winning the Montegrappa Scholastic Prize, the difference between writing middle grade and young adult stories and general writing questions.

After Kimi’s great questions the floor opened up to questions, then following the panel there was a signing, along with mocktail making (which resulted in a super tasty drink) and some headband making. The event was super fun all-in-all and I’m really glad I got to go! I’ll be posting a review of the book along with my interview with Laura as soon as I can.

Photos from the Event 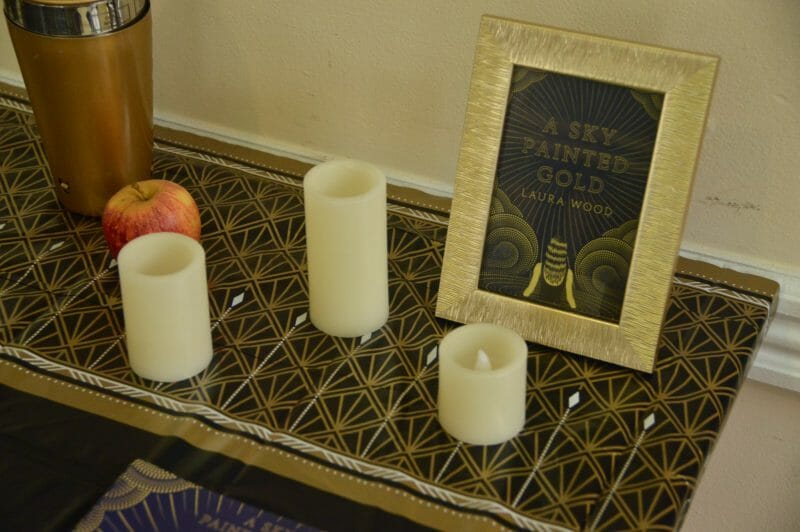 Check out the TEENSGate twitter here to find out about future events!

Previous Post: « Book Review | What If It’s Us by Becky Albertalli and Adam Silvera
Next Post: Book Review | Empire of Sand by Tasha Suri »