Sometimes, a book comes along and all your book blogger friends (Amy, Becky, Beth and Lauren in particular) get advanced reading copies and rave about it so much that you just NEED it.

Now there have been times I’ve been let down by hype, but this was not one of those times. This is one of those times where I love the book so much that both authors have become auto-buys and I need everything by them (I’ve already started this, seriously the run-up hype alone had me going crazy). 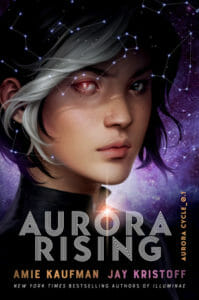 ‘The year is 2380, and the graduating cadets of Aurora Academy are being assigned their first missions. Star pupil Tyler Jones is ready to recruit the squad of his dreams, but his own boneheaded heroism sees him stuck with the dregs nobody else in the Academy would touch…

A cocky diplomat with a black belt in sarcasm
A sociopath scientist with a fondness for shooting her bunkmates
A smart-ass techwiz with the galaxy’s biggest chip on his shoulder
An alien warrior with anger management issues
A tomboy pilot who’s totally not into him, in case you were wondering

And Ty’s squad isn’t even his biggest problem—that’d be Aurora Jie-Lin O’Malley, the girl he’s just rescued from interdimensional space. Trapped in cryo-sleep for two centuries, Auri is a girl out of time and out of her depth. But she could be the catalyst that starts a war millions of years in the making, and Tyler’s squad of losers, discipline-cases and misfits might just be the last hope for the entire galaxy.

If you didn’t work it out by my opening little ramble, I adore this book. For someone who’s favourite Marvel film is Guardians of the Galaxy, seeing Amy describe this book as similar in her review had me itching to read it. And really, that’s a damn great way to look at it. The main characters of Aurora Rising comprise a group of total misfits, either by choice or convention, but they’re such a lovable bunch its unreal.

So, characters. Our Squad 312 is made up of the standard six members: Alpha, Face, Ace, Brains, Gearhead and Tank. But we also have an additional member in the squad who is super important to the story – the ‘Girl out of Time’.

Tyler is basically the top Alpha (essentially squad leader) from the Aurora Academy, so he should have got the best team. However, before the day of picking teams he decides to go flying to clear his head, leading him to the Girl out of Time and making him miss the picking entirely. All isn’t entirely terrible though, he ends up with his twin sister as his Face and their best friend as his Ace, both are highly skilled and wanted by other teams – but they turn them down for Tyler which just goes to show how much they respect him.

As mentioned Scarlett is Tyler’s twin sister, and her role as Face is basically a diplomat. Her role is to talk things out and use her abundant charm in situations. One thing I adored about her though is just how much she cares about everyone, if it was possible to choose one favourite main character (seriously, I love them all) then she’d be high up there.

Cat is the squad’s Ace, and she’s one of the top pilots to ever be in the Academy. She’s got a straight thinking attitude and says whatever is on her mind but she’s ridiculously loyal to Tyler. She also has a little good luck charm for flying, and I couldn’t help but mentally compare it to Yondu’s good luck items in Guardians of the Galaxy…

The Brain, as you might imagine, is head of advising on scientific matters, in addition to being the healer of the squad. Zila is well known in the Academy for being a bit of sociopath – she’ll do whatever she can to test her theories and not care about the harm it could do to others – so naturally Tyler is a little worried about her being around. She’s super pragmatic and only ever speaks if she thinks she can add to something, and I guess in a way I warmed to her a little easier because she reminded me of myself? (Except I’d kill to be as smart as her).

‘But I believe of all the places I have not fit, I fit here a little better.’

As the Gearhead he’s pretty much like a mechanic and techie, and Fin is one of the two non-human members of the squad. He’s Betraskan and pretty sarcastic, he reminded me a little from Rocket from Guardians of the Galaxy and he’s basically really sweet under his sarcasm.

Hot space elf. Basically. (Officially of the Syldrathi race). Think Legolas in space but with Drax’s capacity for understanding emotions. He has some really difficult issues to get through in the story and some pretty bad anger management, which works well as the squad’s Tank as he’s pretty much the muscle. Again though, secretly a sweetie.

The Girl Out Of Time – Aurora

Aurora has been cryogenically frozen for like 200 years, so obviously she’s more than a little bit shook up about everything. Everything’s different to her and you really do feel for her, she’s kind and caring and another sweetie who just so happens to be important for saving the entire galaxy.

The narrative is split into chapters of each of the seven main characters. Here’s the thing – personally I usually dislike multiple points of view because I can find it hard to keep track, but with Aurora Rising I had no trouble because the characters are written so well with distinct personalities that it’s easy to know the perspective. I can’t stress how much that helps with falling in love with all of the characters too, you start to feel like you know them and considering this is only the first book in the series I miss them already.

In terms of the story itself, it’s a whirlwind of action from start to finish and just… The ending kind of broke me in all honesty. I’ve heard that’s a recurring thing from both authors though and it makes me want to read their whole backlog even more. You feel for the characters so much and I just want them to all go off into the sunset happy, I can’t wait for the next instalment in this series. I just need it now.

We the Legion. We the light.
Burning bright against the night. 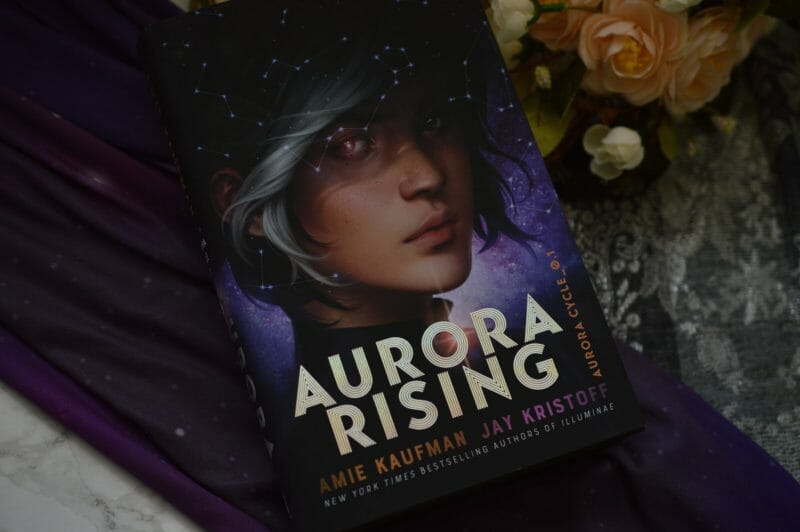 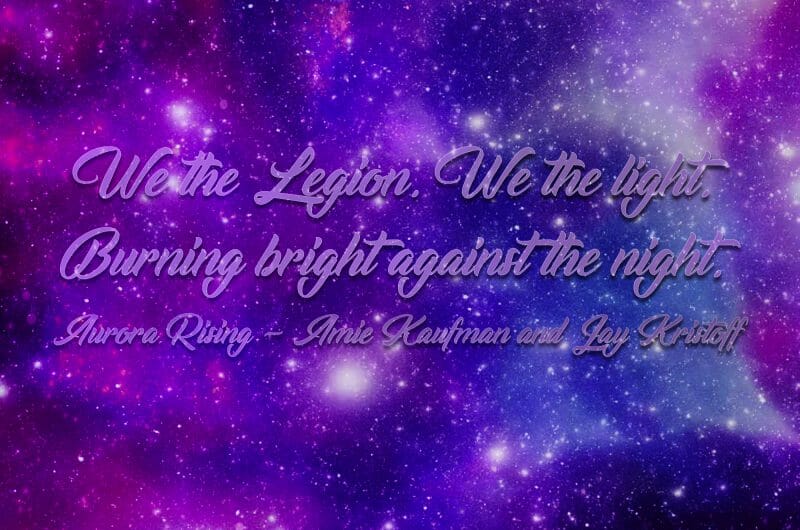 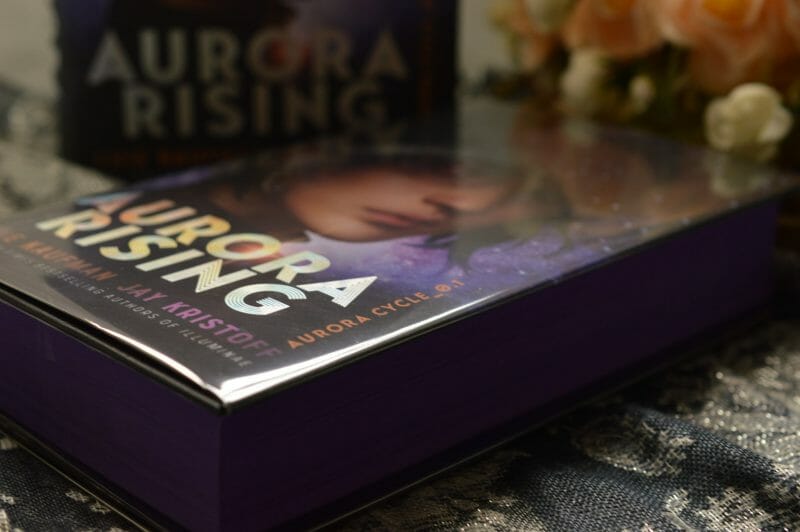 Previous Post: « OwlCrate Unboxing | The World of Caraval
Next Post: Book Review | The Princess and the Fangirl by Ashley Poston »