Okay Hodderscape is basically driving me mad with all the perfect books, first there was This Golden Flame, then A Dark and Hollow Star… and now, I’ve gone and fallen head over heels for In the Ravenous Dark.

This is a story with ~yet again*~ awesome Ancient Greek inspired elements but it’s bloodmages and death magic and a pansexual main character and basically it was the book I absolutely needed in my life but didn’t even realise. The only bad thing I have to say about it is… it’s a standalone. And yet I need more.

*For the record, these inspired elements just make it even better. Pick. This. Up.

Anyway… read on for my full review! 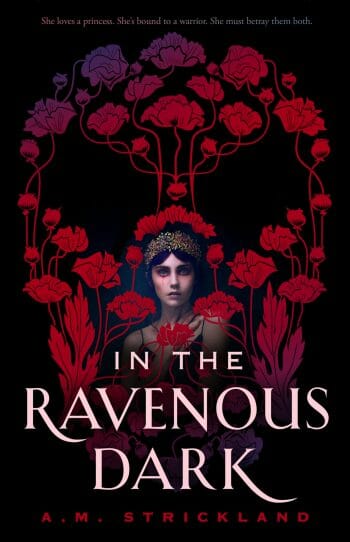 Title: In the Ravenous Dark
Series: Nope, sadly!
Author: A.M. Strickland
Publisher: Hodder & Stoughton
Release Date: May 18th 2021
Pages: 390
Source: e-ARC provided by the publisher through NetGalley (this in no way affects my review which is honest and unbiased) Hardcover finished copy purchased by myself
Rating: ★★★★★

‘A pansexual bloodmage reluctantly teams up with an undead spirit to start a rebellion among the living and the dead.

In Thanopolis, those gifted with magic are assigned undead spirits to guard them—and control them. Ever since Rovan’s father died trying to keep her from this fate, she’s hidden her magic. But when she accidentally reveals her powers, she’s bound to a spirit and thrust into a world of palace intrigue and deception.

Desperate to escape, Rovan finds herself falling for two people she can’t fully trust: Lydea, a beguiling, rebellious princess; and Ivrilos, the handsome spirit with the ability to control Rovan, body and soul.

Together, they uncover a secret that will destroy Thanopolis. To save them all, Rovan will have to start a rebellion in both the mortal world and the underworld, and find a way to trust the princess and spirit battling for her heart—if she doesn’t betray them first.‘

Okay, obviously first up this has a lot of dark elements in it. Right from the very first chapter (which, btw, is enough to suck you in and have the story living rent-free in your head already) we get a look into the chaotic world Rovan lives in where every bloodmage must be accounted for. It’s a perfect set up to the rest of the book, but there is a lot of blood, violence and gore throughout.

After the first chapter we get a time skip and we’re introduced to our 19-year-old, pansexual Rovan who is instantly getting herself into trouble. I won’t lie, I loved her from the beginning. She’s straight-talking, sassy and sarcastic, clearing trying to keep people out so that she doesn’t end up hurting them. (But secretly loves others with everything she has and is a bit of a secret cinnamon roll, so I loved her even more.)

It takes a monster to hunt a monster.

Before I go into the characters though, the world-building and magic system is just plain awesome. I’ve pretty much been a fan of any story with mention of shades in and death magic/necromancy since Reign of the Fallen by Sarah Glenn Marsh, so I kind of went into this story expecting to fall in love with it just as much. And it didn’t let me down! Blood mages are basically tied to guardians, who are the undead spirits. Rovan sees this as unnatural and disturbing from the beginning but… after a little hiccup she ends up with her own guardian – against her will.

The city of Thanopolis is described as having statues of the Goddess, depicted as the mother, maiden and crone. And alongside descriptions of clothing it came across as a very Ancient Greek-inspired type of world. Rovan ends up in the palace early on too and it’s described as being full of flowers everywhere, I’d be lying if I didn’t say I’d love to visit a place like Thanopolis (but I’d skip the tour of the necropolis, I think that might be too creepy even for me).

The main characters are absolutely what makes this story though. Rovan, as mentioned, is basically a sassy badass. She goes through a lot during the story but her character growth is clear to see. There’s Lydea, who is a bisexual princess but does not agree with how things are run in Thanopolis and wants to run away from everything. She’s beautiful and has the heart of Rowan from the beginning. Rowan’s guardian, Ivrilos, is another great source of character growth and as we learn more about him you kind of can’t help but fall for him. And then… Japra. Japra is non-binary and asexual and full to the brim of sass, I loved them from the second they were introduced and for the most part they’re such a breath of fresh air for Rovan!

“You’re a wildflower in a garden of rose-covered thorns.”

As you might be able to tell from the above, one of the big strengths is definitely diversity and representation. There’s a polyamorous relationship too and it’s quite endearing to read that happen.

In short, I adored this book. I absolutely can’t wait to read more of Strickland’s work too! 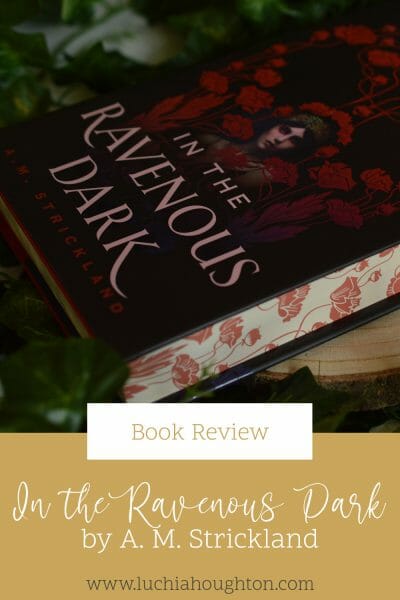