Hey all, today’s post is a review for a book that I’ll admit I wasn’t that aware of before requesting, the cover was so beautiful though that I really wanted to give it a shot, and I ended up loving it!

Message Not Found by Dante Medema is the story of a girl’s life after her best friend dies in an accident, with the book told through a multi-format way including text messages (both real and AI). Although it’s heartbreaking at times, I really enjoyed it and the ending was such a lovely one for a story with such a sensitive topic. 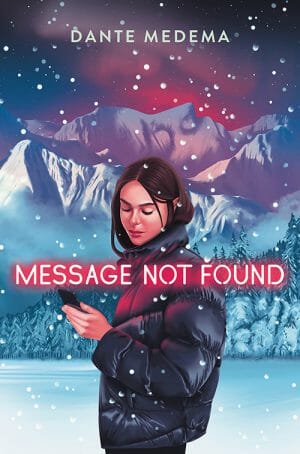 An emotionally complex portrayal of secrets, loss, and grief from Dante Medema, Indies Introduce author of the Indie Next Pick title The Truth Project.

Bailey and Vanessa shared everything: laughter, secrets, and packets of Pop Rocks to ward off bad days. But that all changed the night Vanessa left Bailey’s, headed for home, and ended up swerving off a cliff nowhere near her house. Now Bailey, who thought she knew Vanessa better than anyone in the world, is left with a million unanswered questions, and the only person with answers is gone.

To help grieve her loss, Bailey creates a chat bot of Vanessa using years’ worth of their shared text messages and emails. The more data she uploads to the bot, the more it feels like she’s really talking to her best friend. That is, until the bot starts dropping hints that there was more going on with Vanessa than Bailey realized—a secret so big, it may have contributed to Vanessa’s death.

Message Not Found is the story of our main character, Bailey, as she deals with the heartbreak and grief of losing her best friend, Vanessa. Of course it’s heartbreaking to read at times, and a lot of the focus of this story is behind Bailey finding out all of the secrets that Vanessa never shared with her. Strangely enough though it was simultaneously an adorable read.

I guess what we would expect is that Bailey goes around asking questions and such… although there is a little of that (and a lot of people avoiding said questions), she goes the extra mile by using her mum’s technology to create a bot that can text like Vanessa. In her grief, she does some morally wrong things to make this bot as accurate as possible, but the result is something that makes her life better whilst destroying it at the same time.

Vanessa left behind her boyfriend, Mason, who is as destroyed as Bailey over the sudden death and together they begin to form a sweet, growing connection surrounded around Mason trying to heal whilst Bailey refuses to move on from looking into everything.

Bailey also ends up back with her ex-boyfriend in the meantime, but it’s clear he just wants her to forget about Vanessa and move forwards… even though the timing is definitely not long enough for that.

We also see that Bailey is supported by her two mums, who are genuinely fantastic characters even though they’re definitely seen much less than other side characters. They support her through every step of the story and it’s clear to see that Bailey has grown up surrounded by love, in stark contrast to Mason’s character in particular.

The story is told in a mixed media format, with texts between Bailey and others throughout (mostly her and Vanessa-bot). It made it a lot quicker to read whilst adding a more personal element, and I definitely enjoyed that side to it. It’s another reason why the story is so sad to read though. We see times where the only comfort she has is in texting the AI, as though she never needs to move on with her life as long as she feels like Vanessa is still there.

The ending wraps up in a fulfilling way, and if you’re looking for a quick read you’ll enjoy then I’d definitely recommend Message Not Found, with obvious content warnings being that if you’ve every lost someone close to you, especially suddenly, then this is something to be mindful of.

Are you planning to preorder this book?