Today’s post is my part of the blog tour for The Kaiju Preservation Society by John Scalzi, run by Black Crow PR.

I’m going to start by saying that as soon as I heard about this book, I really wanted to read it. A book that was a must read for fans of Jurassic Park and Godzilla? All the ticks for me there!

I was expecting a cool read featuring kaiju, and I wasn’t disappointed in the slightest! Read on for my full review. 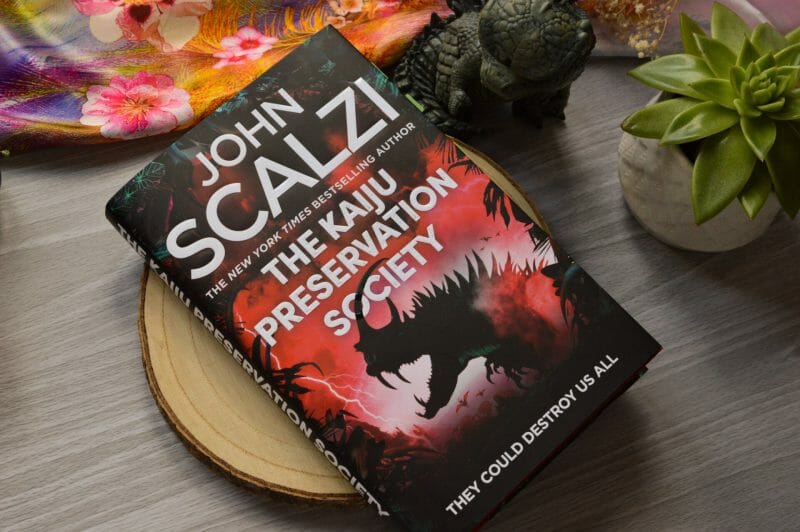 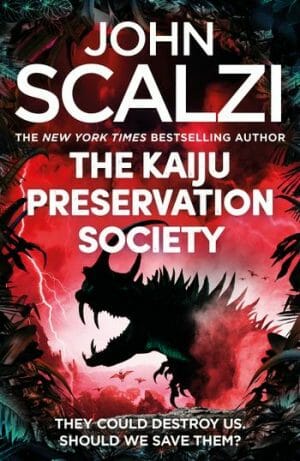 When COVID-19 sweeps through New York City, Jamie Gray is stuck as a dead-end driver for food delivery apps. That is, until Jamie makes a delivery to an old acquaintance, Tom, who works at what he calls “an animal rights organization.” Tom’s team needs a last-minute grunt to handle things on their next field visit. Jamie, eager to do anything, immediately signs on.

What Tom doesn’t tell Jamie is that the animals his team cares for are not here on Earth. Not our Earth, at at least. In an alternate dimension, massive dinosaur-like creatures named Kaiju roam a warm and human-free world. They’re the universe’s largest and most dangerous panda and they’re in trouble.

It’s not just the Kaiju Preservation Society that’s found its way to the alternate world. Others have, too–and their carelessness could cause millions back on our Earth to die.

The Kaiju Preservation Society begins at the very start of Covid-19, with our main character being let go of their job and in a bit of a situation because, of course, they need money for rent and such. The first part hit home a little for me because I was in Jamie’s position, but it would have been such a dream come true if I’d ended up in their position!

They end up delivering food to someone who works for an animal rights organisation, and who actually really needs to hire someone for a position at his… workplace… very soon. So Tom gives Jamie the job pretty much there and then and only tells Jamie they’ll be working with “large animals”.

That kind of energy is an ongoing theme to The Kaiju Preservation Society too. It’s mostly centred around friends being there for each other and having a bit of a laugh and a joke along the way, and it makes it such a nice, realistic, read. Regardless of your type of position in a friend group, you can probably place yourself into Jamie’s group and imagine it crystal-clear.

Jamie’s initial friends are those of their roommates, but once Jamie joins the KPS they quickly make good friends with the other newbies, and basically everyone there? One of my favourite characters is actually a side character called Martin Satie, a helicopter pilot who basically just screams coolness. He says things exactly as they are and doesn’t sugarcoat them, remaining loyal and earnest throughout. I have no idea why, and this is just a side thought really, but I think John Leguizamo would portray him perfectly in a live action film.

The story is told in first person, and Jamie is never actually identified as a specific gender. With Jamie being a name that isn’t really associated with any gender you can picture yourself as them very easily, which is a smart move from Scalzi and not something I think I’ve ever seen in a book before?

There were so many moments that really reinforced the found family vibe to this book, including the following:

“Is there something about this place that everyone is great, except that they will murder you if you cross them?”

“There is a certain personality type that thrives here, yes.”

Moments like the above I just couldn’t stop myself from grinning to, it was just so easy to picture a group of my friends making the same kind of jokes? Maybe its a generational thing, but it did help me to enjoy it even more!

This book had a lot of things I loved about it, the one thing that I didn’t like so much was it felt predictable. But that could definitely have been a personal thing… (I may have been projecting a little too much into the story itself, sometimes that’s inevitable though.) Regardless, as this was my first ever book by Scalzi that I’ve read I am definitely interested by both his future and past projects! Especially if they also involve characters oozing with so much personality.

🌿 If you love films like Jurassic Park and Godzilla, not only will you love this story but you’ll be able to imagine the world extremely well. They’re both referenced within the text alongside other science fiction and it makes it such a cool read if you’re a bit of a nerd yourself!

🌿 SCIENCE. Scalzi explains everything in the book with science, and he doesn’t just stick to biology he brings in chemistry and physics too! So, if you’re a science fan… this is a book for you.

🌿 A review from The Times called this ‘an escapist delight’, and I couldn’t agree more. If you’re after a [mostly] light-hearted read with lots of joking around, this would be a great shout.

🌿 Although this is a short read, there’s a lot of diversity within. There’s queer, non-binary and POC representation. 🌈❤️

🌿 FOUND FAMILY. Personally, I am a huge sucker for found family. And a group of newbies at the KPS get put together and form such a cute friendship throughout the story. ❤️ 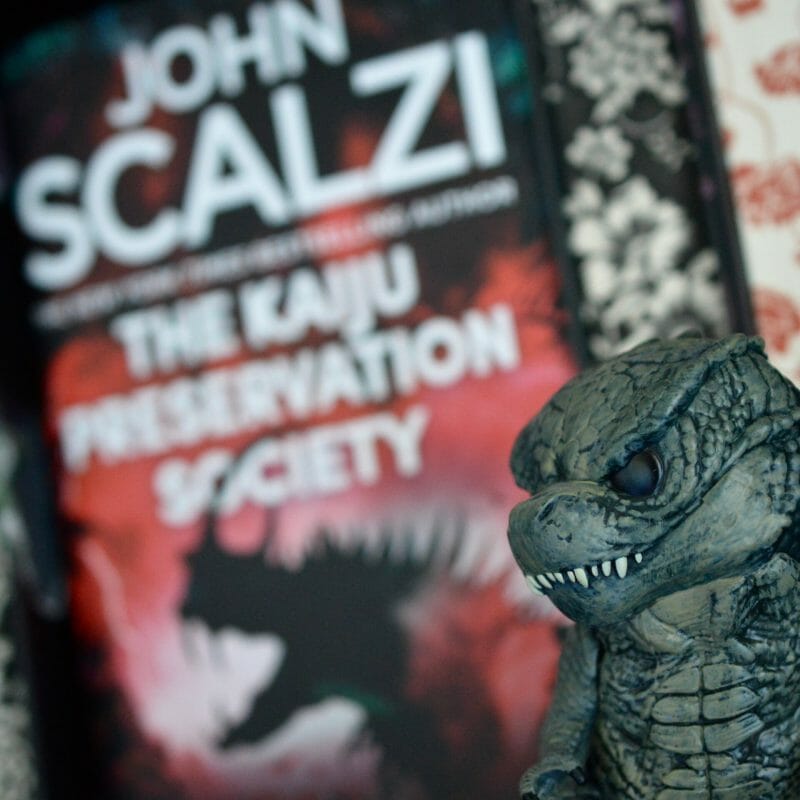 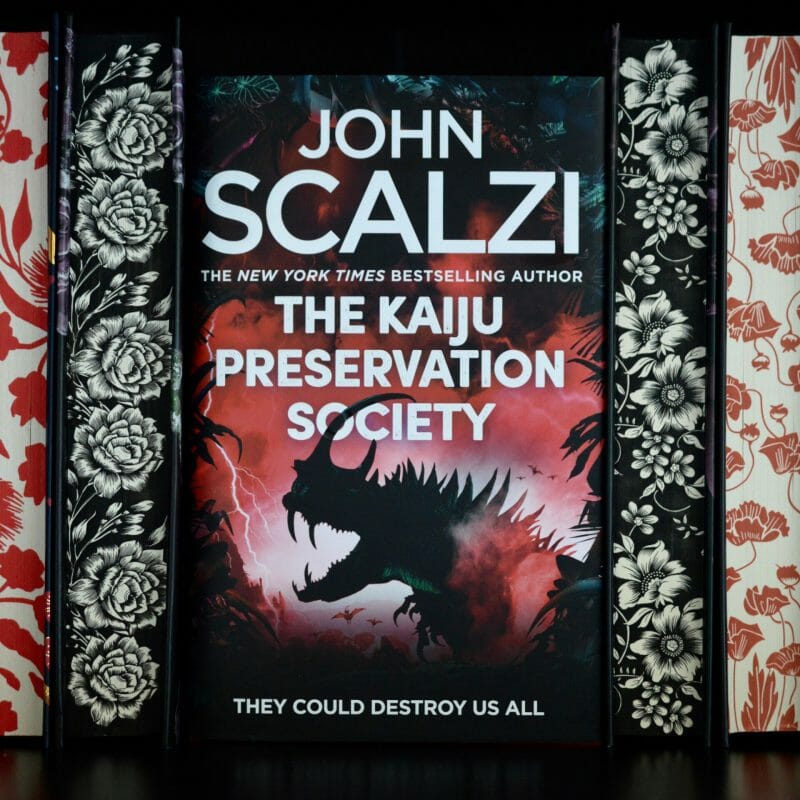 Is there a book you’re excited to read… but al

💜 Cover Lovin’! 💜 What’s something you

Hey loves! Sorry I’ve been chaotic and kind of q