Okay so earlier on this year I read Simon Vs. and it was the cutest story ever, it’s one of the books which made me start reading Contemporary YA alongside Fantasy and that meant I eventually found myself listening to Adam Silvera’s books on Scrib’d – They Both Die at the End and History Is All You Left Me – only to find that they were also ridiculously cute (sometimes a little heartbreaking, mostly adorable though).

Naturally, when I found out about What If It’s Us, I was over the moon. I ended up winning a proof copy at YALC and I now have two copies of the book, the US and UK version because I loved it so much. But I don’t want to spend too long talking about my obsessive love for it on this post, there’s a full review you can read here.

Last Sunday I had the opportunity to interview both Becky and Adam before their Manchester event, so keep on reading for that!

An Interview with Becky Albertalli and Adam Silvera

Luchia Houghton: What was your inspiration behind What If It’s Us?

Becky Albertalli: I think very early on in our friendship we were talking about dating stories and just crushes and experiences when we were younger and I had told one story that was sort of somewhat related to a missed connection and from there that was kinda the scene where Adam was just like…

Adam Silvera: Yeah I just jumped in I was like ‘Yo how cool would it be if we did a YA novel like this?’ and you know that was revolving around missed connections and had that sort of romantic energy around it too and that kind of like cat-and-mouse chase for a little bit and yeah and then we just figured out who Arthur and Ben were.

LH: So Arthur is a really huge fan of musicals, do you have a favourite musical yourself?

BA: For me I have, I mean I have a couple, I love Hamilton and Dear Evan Hansen, I love The Last Five Years, Les Mis… I’ll stop there for now.

AS: Like right now my current favourite is Dear Evan Hansen and I haven’t seen The Last Five Years and I just know… I will love it.

BA: Having just listened to the soundtrack again I was like I’m not… I know he’s on a deadline, I know he’s sick, I’m not gonna do this right now but I’m like this is like the most Adam Silvera musical of all time.

AS: Yeah I have the movie downloaded too but like I also think I would have really loved Spring Awakening.

BA: Oh yeah Spring Awakening is another on, yeah you world! Let’s watch the movie on the way to the Philippines.

BA: Can we do that, please?

LH: Whilst the story is definitely romantic, some dates do have their downsides. Did you ever feel tempted to kind of make them go a little bit better for them?

AS: I think it was always to keep it realistic and to not… ‘cause we want the world for these boys, it would be so easy to just write a book where we just give them absolutely everything they want but y’know stories need obstacles unfortunately and I think we would read a book that’s like 300 pages of everything going right for Arthur and Ben but I’m not 100% sure that like everyone else is going to appreciate it quite as much. But it just felt realistic to have these dates that have highs and lows because I also think that’s just life in general.

BA: Yeah and I don’t know like it’s hard to imagine a book where everything goes right for them because it wouldn’t be Arthur and Ben it just and like who they are at that particular moment in their lives y’know.

LH: What would be your perfect dates and why?

BA: An amusement park, for sure, but not like Six Flags. This is where I’m like blatantly Arthur – I’m like Coney Island. I’m still, that was his first idea for their first date and I have not given up on that one, that was a good idea. I mean I’m somebody who got married at a vintage amusement park and like that is like my favourite kind of place in the entire world and I’m not even like I don’t even like most rides necessarily I just like being there.

LH: So what was your favourite scene to write in What If It’s Us?

AS: I could probably guess for you.

BA: Yeah do you wanna guess for each other?

AS: Yeah, actually, which is so wild because like in our original vision for this book like that epilogue was never a scene that we talked about and I love it so much.

BA: Yeah we, when our editors told us like ‘what about an epilogue’ we were just like ‘We can do that?’

LH: So will we see more collaborations like What If It’s Us in the future?

AS: Hopefully, I mean yeah we’re both right now booked with contracts which unfortunately don’t include each other but you know Arthur and Ben’s story took a few years to happen but we made it happen so you know there’s definitely no reason to suggest that we won’t combine forces again.

LH: What is your favourite novel?

BA: That’s a question that I am unable to answer it’s like complicated because we’re friends with so many authors for one thing, so it’s like kind of like asking who do you like best out of all of your friends. So I know we’re both huge Harry Potter fans. There’s like so many books.

AS: Which I know is like not an exciting answer.

LH: So finally, do you have any advice for aspiring authors?

AS: Yeah I mean my advice is to you know if you can like attend book events or watch authors on YouTube talking about their process but also remembering what works for one author may not work for you and I’ve written five books now and they were all written in significantly different ways. It’s not always as simple as like ‘Oh well I write 1,000 words a day and then I write the book from start to finish like, in order’. Like no, that’s not how it works. Sometimes I outline, sometimes I don’t. But yeah just remember that writing is trial and error and y’know figure out what works for you and your process for that, for each book.

BA: Yeah I definitely agree with all of that and I think the thing that I would add which is like very specific and also may not work for everyone but for me it was really helpful to write fan faction which I did for a long time before I ever even considered trying to be a published author but I think in retrospect that was the absolute best practice in developing a voice that I could have given myself and I did think that those skills, that skill set transferred over when I was beginning to create original characters.

AS: Thank you so much, appreciate it.

Thank you so much to Becky and Adam for answering my questions and to Kimi for the chance to ask them!

Also massive thank you to Becky and Adam for signing my books after the panel, of course the queue was huge but I was able to get my photo taken with them too! 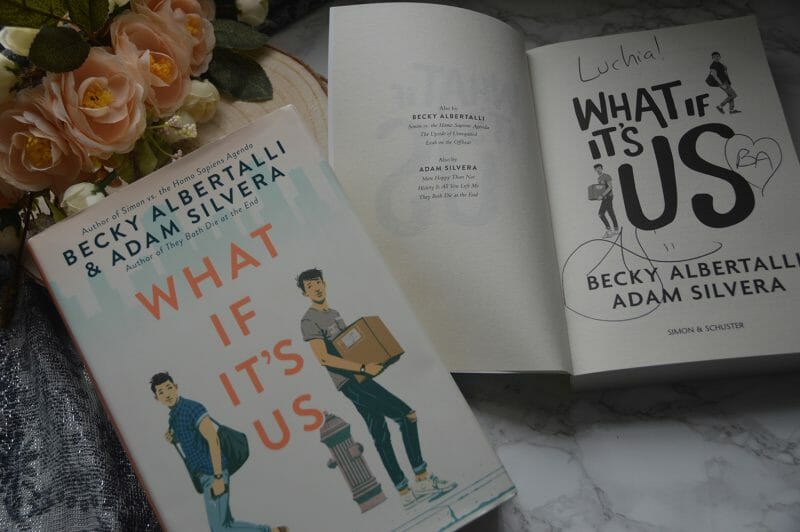 What If It’s Us 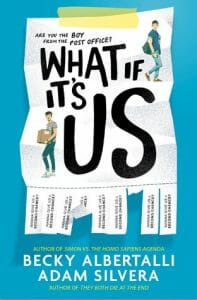 Have you read What If It’s Us yet?
Feel free to leave a comment or Tweet @LuchiaHoughton!