Hello and welcome to another of my ‘I put reading a book off for ages then fell in love with it’ blog posts!

Girls of Paper and Fire had been on my radar since last year’s YALC, when I picked up an ARC of it through Hodderscape’s ‘Buy two books for an ARC’ thing. And then in November I got an exclusive of it in both my FairyLoot and OwlCrate.

I had a really bad reading slump after YALC though and so I’ve only just got round to it but my god, this is a fantastic story!*

*Side note, I know a lot of my reviews lately are five star but it’s because I’m only reading things through that I’m loving, sorry (but at least you get awesome recommendations that way)! 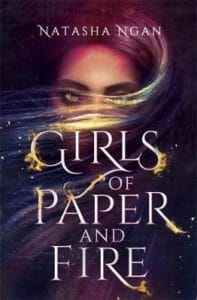 ‘Each year, eight beautiful girls are chosen as Paper Girls to serve the king. It’s the highest honor they could hope for…and the most cruel.

But this year, there’s a ninth girl. And instead of paper, she’s made of fire.

In this lush fantasy, Lei is a member of the Paper caste, the lowest and most oppressed class in Ikhara. She lives in a remote village with her father, where the decade-old trauma of watching her mother snatched by royal guards still haunts her. Now, the guards are back, and this time it’s Lei they’re after–the girl whose golden eyes have piqued the king’s interest.

Over weeks of training in the opulent but stifling palace, Lei and eight other girls learn the skills and charm that befit being a king’s consort. But Lei isn’t content to watch her fate consume her. Instead, she does the unthinkable–she falls in love. Her forbidden romance becomes enmeshed with an explosive plot that threatens the very foundation of Ikhara, and Lei, still the wide-eyed country girl at heart, must decide just how far she’s willing to go for justice and revenge.’

For anyone who doesn’t know about Girls already, this story is seriously intense. Our main character, Lei, is forced to become a concubine in a world with demons (moon-caste), humans (paper-caste) and humans with demon qualities (steel-caste). Such is the world split up, there’s a system in place where humans are placed at the bottom of the pecking order as a Demon King is on the throne. The Demon King is honestly one of the most irredeemable villains ever, he’s a straight up bad guy and I just completely hated him, he’s very well-written.

Lei though, I love her. She’s taken at a fairly young age and hasn’t had time to find out who she really is, and that makes Girls a fantasy story with a coming of age subplot because she realises she has feelings for a girl and cue this becoming an f/f relationship fantasy on top and it’s just brilliant, I loved seeing her grow into herself.

Also, it’s slow-burn romance. Which I’ll forever be a fan of!

Not only does Girls have a great romantic relationship in though but also a huge focus on friendships and family. Lei’s strength originally comes from her family, she wants to make sure that they’re safe before anything else. Friendships wise, we have a sweet girl called Aoki and I really enjoyed reading her character for the most part, she was almost always supportive of Lei barring one particular instance.

Some of the girls have basically been training all of their lives to become a ‘Paper Girl’ (i.e. one of the King’s concubines), picked and preened to be the perfect example. Regardless, all of the chosen girls take part in classes to make sure that they’re the best example of themselves possible for the King. Lei, on the other hand, has never had any desire to be involved with the King and as such she’s routinely pointed out to be the worst student. The training really emphasises that what they’re doing isn’t any easy thing, but they’re also looked down on by other humans even though they can’t change what happened, for most it wasn’t what they wanted but rather what they had to do.

The girls are chosen one at a time to visit the King, and honestly it had me so scared for Lei. Although inevitable, I was really hoping he’d just die before it happened… The visits aren’t easy to read through, but thankfully Natasha keeps them quite short without taking out all of the horrors.

There are a lot of cultural references throughout to different types of clothing, such as a cheongsam, and I really loved this little input. It wasn’t so heavy that you needed to look up something every few minutes but it was just enough to really help you imagine this world.

The ending was somewhat expected, but more so because I knew that there’s a second book due out kind of soon (I can just about wait until November but you can bet I’ll be trying to read it before then). I really can’t wait to see what next happens with Lei and I’m definitely classing Natasha as an auto-buy author! So yeah, I loved this book.

Remember, even that which seems impossible at first can be overcome by strength of mind and heart.

When the world denies you choices, you make your own. 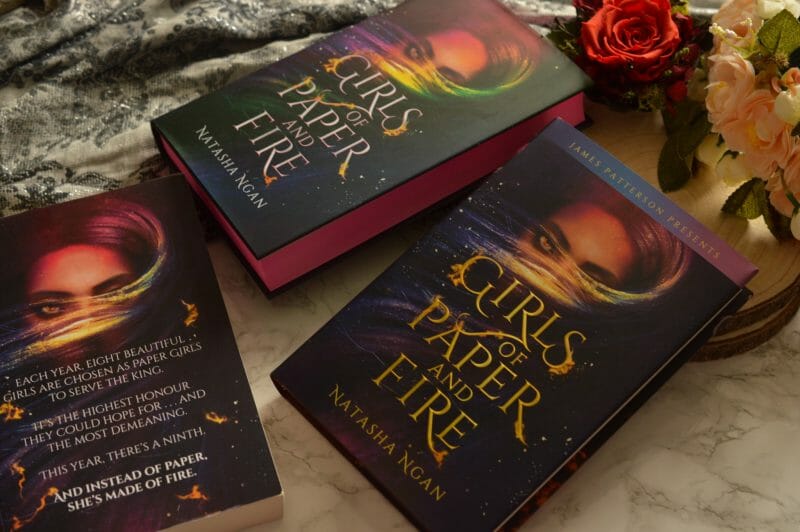 But what the Demon King and his court do not understand is that paper is flammable. And there is a fire catching among us.