Okay so my review for today took a while to write because I needed to recover from just how much I loved the book. Sorcery of Thorns was such an unbelievably great read and I’m just really sad that it’s a standalone because I fell in love with the characters and the world; with a sarcastic set of lovable characters and a world full of great libraries filled with magical books.

If you’re not sold yet, read on for my full review, which is more detailed but spoiler-free! 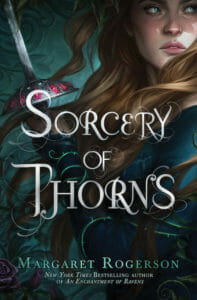 ‘All sorcerers are evil. Elisabeth has known that as long as she has known anything. Raised as a foundling in one of Austermeer’s Great Libraries, Elisabeth has grown up among the tools of sorcery—magical grimoires that whisper on shelves and rattle beneath iron chains. If provoked, they transform into grotesque monsters of ink and leather. She hopes to become a warden, charged with protecting the kingdom from their power.

Then an act of sabotage releases the library’s most dangerous grimoire. Elisabeth’s desperate intervention implicates her in the crime, and she is torn from her home to face justice in the capital. With no one to turn to but her sworn enemy, the sorcerer Nathaniel Thorn, and his mysterious demonic servant, she finds herself entangled in a centuries-old conspiracy. Not only could the Great Libraries go up in flames, but the world along with them.

As her alliance with Nathaniel grows stronger, Elisabeth starts to question everything she’s been taught—about sorcerers, about the libraries she loves, even about herself. For Elisabeth has a power she has never guessed, and a future she could never have imagined.’

Margaret Rogerson’s first book, An Enchantment of Ravens, was one of the books I really loved reading last year. Full of fae and magic, I was really excited to see what she would do with a library-set fantasy story.

Yet again, with Sorcery of Thorns Margaret set up a whole new and fascinating world. Straight away we’re thrown in to an action-filled introduction where we meet Elisabeth, the main character, along with a magical book. The books have pretty harrowing origins, being made from human sacrifices by sorcerers. This helps set you up with understanding why most (including Elisabeth) aren’t the biggest fans of sorcerers. Elisabeth wants nothing more than to stay in the library, surrounded by the books whilst gaining the position of Warden.

Wardens both protected grimoires from the world, and protected the world from them.

She meets Nathaniel prior to everything going really really bad, whilst he’s visiting the library she lives in. If you’re a fan of sarcastic characters like I am then you’ll love him, and Rogerson gives him and Elisabeth great chemistry from the very beginning. Nathaniel is such a great character, it’s worth noting as well that the book has bi representation with Nathaniel too and also some aromantic representation with another character. Nathaniel himself though is sarcastic and broody and just… I love him.

“A wise precaution. We sorcerers are terribly wicked, after all. Prowling the wilds, stealing away maidens…”

Glossing over the details (because spoilers) Elisabeth finds herself being accused of something terrible and taken away from her home by the very sorcerer she’d previously had a run in. This is also when she meets his demon, Silas.

He can transform into a cat as well as a human and he is honestly my favourite character from the story. He’s pretty mysterious at first but it’s clear he cares a lot for Nathaniel and, eventually, Elisabeth also. Plus whenever he’s a cat he has just as much attitude and he’s just too adorable not to like. (I really like cats, so that may be swaying my opinion, but still.)

He froze, completely rigid, enduring their affection in the manner of a purebred house cat being squeezed by a toddler.

As with An Enchantment of Ravens, the words and general writing within Sorcery of Thorns are just beautiful! I can’t describe it to a point that fully justifies how enchanting it is but it’s done so well that we move around places quickly and yet everything is fully fleshed out so the book doesn’t confuse you.

Sunlight streamed in through the rose window high above the front doors, casting prisms of ruby, sapphire, and emerald across the circular balconies’ bronze rails.

I don’t feel like I’ve given Elisabeth enough justice either, but I loved her character too. She’s a book-loving heroine and constantly showing how brave she is both with heroic actions and also with how she develops. At the beginning she’s almost indoctrinated to believe that magic and sorcerers are bad but she starts to question things and grow as a person which is great to read!

Overall, I’m just super sad that there won’t be more from this world! But I know that whatever Rogerson next writes will absolutely be another auto-buy for me. 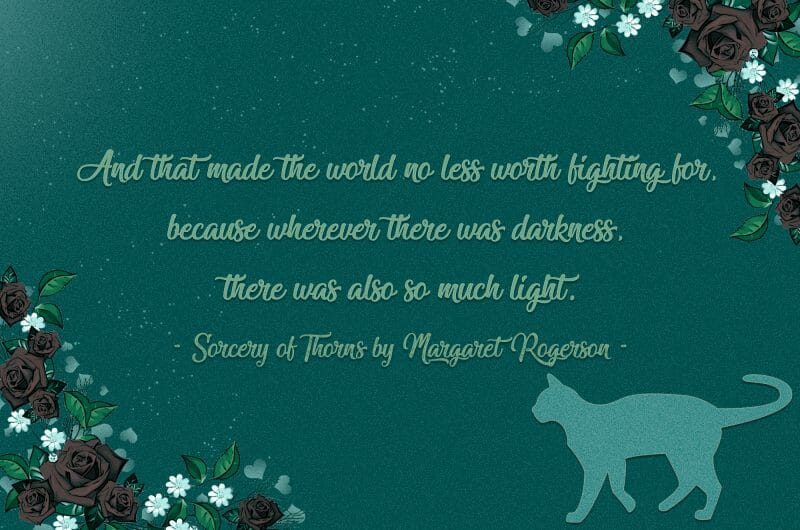 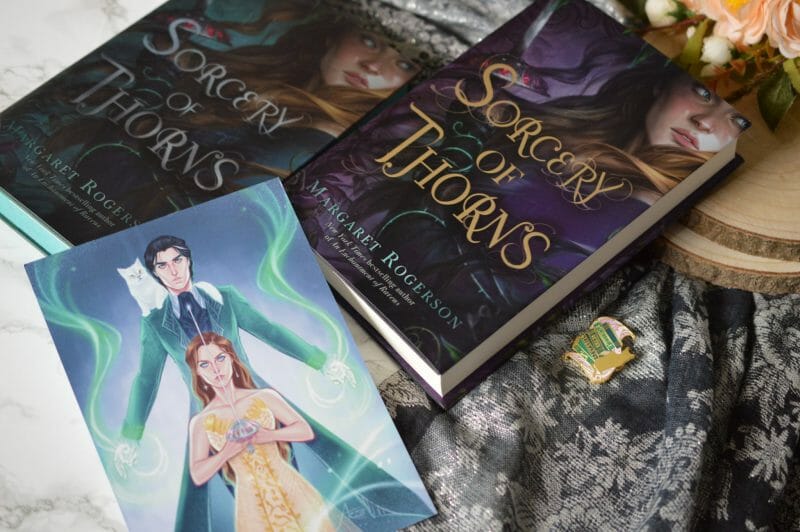 Previous Post: « Book Review/Giveaway (US only) | Spin the Dawn by Elizabeth Lim
Next Post: OwlCrate Unboxing June 2019 | Libraries of Wonder »