A while ago I heard about a story that was similar to Studio Ghibli creator Miyazaki’s Spirited Away, and really that was all I needed to be very excited about this gorgeous book, The Girl Who Fell Beneath the Sea, by Axie Oh.

Huge thank you to Kate from Hodder for providing me with a physical proof (it came in such an adorable little package) and… I fell in love with this story. 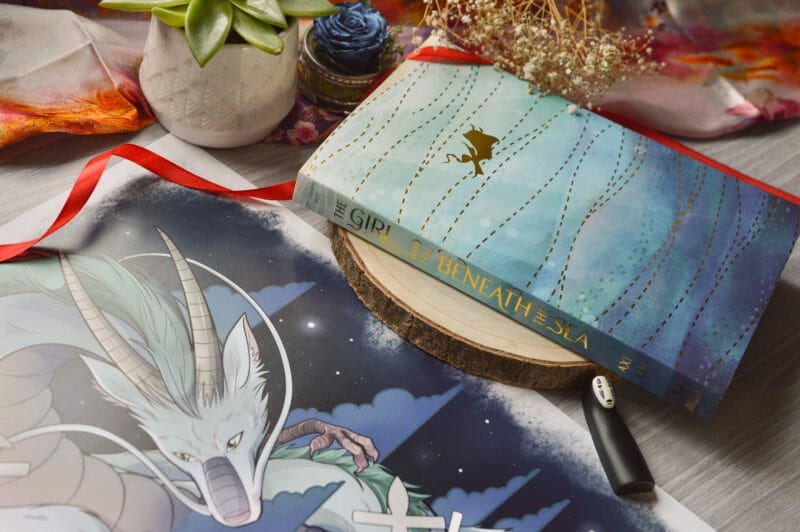 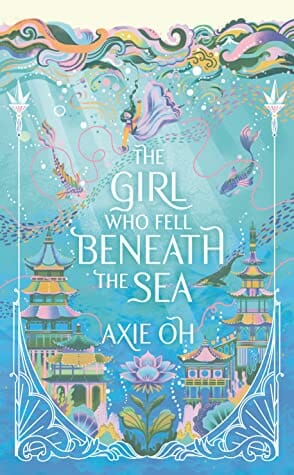 Title: The Girl Who Fell Beneath the Sea
Series: Standalone
Author: Axie Oh
Publisher: Hodder & Stoughton
Release Date: February 22nd 2022
Pages: 336
Source: Proof copy gifted by the publisher (this in no way affects my review which is honest and unbiased)
Rating: ★★★★★

‘Deadly storms have ravaged Mina’s homeland for generations. Floods sweep away entire villages, while bloody wars are waged over the few remaining resources. Her people believe the Sea God, once their protector, now curses them with death and despair. In an attempt to appease him, each year a beautiful maiden is thrown into the sea to serve as the Sea God’s bride, in the hopes that one day the “true bride” will be chosen and end the suffering.

Many believe that Shim Cheong, the most beautiful girl in the village—and the beloved of Mina’s older brother Joon—may be the legendary true bride. But on the night Cheong is to be sacrificed, Joon follows Cheong out to sea, even knowing that to interfere is a death sentence. To save her brother, Mina throws herself into the water in Cheong’s stead.

Swept away to the Spirit Realm, a magical city of lesser gods and mythical beasts, Mina seeks out the Sea God, only to find him caught in an enchanted sleep. With the help of a mysterious young man named Shin—as well as a motley crew of demons, gods and spirits—Mina sets out to wake the Sea God and bring an end to the killer storms once and for all.

But she doesn’t have much time: A human cannot live long in the land of the spirits. And there are those who would do anything to keep the Sea God from waking…‘

I guess I’ll start off this review by saying that if you’re after a book that will 100% have you in tears, this is a very very good choice. Happy tears at the end! And then sad tears when you realise it’s the end… I had to double check for more pages. It had a perfect ending for a standalone, I just wanted more of the beautiful story!

Also, this is another book where you’re very likely to be struggling between the gorgeous UK cover, as illustrated by
Karl James Mountford (featured above) and the US cover which can be found to the right. Honestly, both of them are perfect for the story. Get both if you can :’)

SO! The story. Our main character, Mina, knows that her brother Joon is unbelievably in love with Shim Cheong, and she him. But, Shim Cheong is the most beautiful girl in the village, and so she’s believed to be the girl fated to end the curse of the Sea God, which would be from being sacrificed to him to become the Sea God’s bride. Mina knows that Joon is trying to stop it from happening, and to keep both him and Shim Cheong safe she intervenes and sacrifices herself instead. (Being taken to the Sea God’s Spirit Realm by a DRAGON, no less.)

Once Mina is in the spirit realm, she finds that the beloved Sea God is no more than a mere boy, stuck in a very long sleep. Here is where she also meets Lord Shin… who tasks himself with protecting the Sea God, and so separates Mina’s fate from that of the Sea God’s, to keep him safe. In doing so, Mina is separated from her own spirit, which is then stolen by Shin.

Things don’t exactly go to plan… and Mina ends up with her fate tied to Shin’s. This happens within the first third of the book and everything gets so much more eventful after that (which is saying something, because even before then so much happens).

Mina has a love for stories, thanks to her Grandmother, and this results in us hearing a lot of them throughout which just add to magical elements of the story itself. At one point, she actually tells the Tale of Shim Cheong itself.

When I went to write up this review, it was actually the first time I looked into ‘The Tale of Shim Cheong‘, the Korean folktale the story is a retelling of. So… in the folktale, Shim Cheong sacrifices herself to “cure” her father’s blindness, and ends up marrying the emperor as a reward whilst her father regains his eyesight. I love how Axie turned the tale into such a beautiful story, and I really love how there’s no change to Shim Cheong’s father. I don’t know if it was intended to be that way, but to me it seems like Axie’s way of saying Shim Cheong’s father’s blindness never needed to be “cured”, and I love that.

‘Nothing appeased the Sea God’s wrath except the life of someone beloved.’

In terms of the world-building, it is genuinely beautiful. The idea of a world under the sea with floating fish, dragons and other mythical creatures… although it sounds dangerous, it would also be gorgeous to see. Axie Oh writes it in such a way you can picture it all perfectly.

Characters, obviously Mina is a remarkable girl. She doesn’t take long to decide to sacrifice everything she has to save her brother and throughout the story she’s determined to break the Sea God’s curse and save the living people, no matter what sacrifices she has to give up along the way to achieve this. She goes through heartbreak and is hurt physically, but even still she persists throughout to help as many as she can.

Shin is one of those secret cinnamon rolls. He appears mysterious and heartless but you quickly find out that there is a lot more to him, and he’d do anything for his friends. Including Namgi and Kirin, who basically act like two brothers who squabble consistently but they are equally lovely people. Mina also meets three mysterious spirits in the world, who help her from their very first encounter, Dai, Mask and baby Miki. Every time they popped up in the story, I couldn’t help but smile. They’re forever cute and these six characters definitely end up fulfilling the ‘found family’ trope (a personal favourite).

“Sometimes you don’t find family in your own blood, but elsewhere.”

The world may be beautiful, but it’s also deadly. And Mina finds out that there a lot who are hoping to destroy the Sea God once and for all. Her faith in the gods and goddesses is tested also, as she finds out they aren’t all she had hoped for.

Of course, the biggest comparison is that of to Spirited Away… but I will admit at times I was also reminded of Studio Ghibli’s Howl’s Moving Castle. So, basically, if you love Ghibli in general you’ll love this story. You’ll laugh, you’ll probably cry and you’ll smile a lot reading this story. It’s one that you 100% need to get your preorders in for! 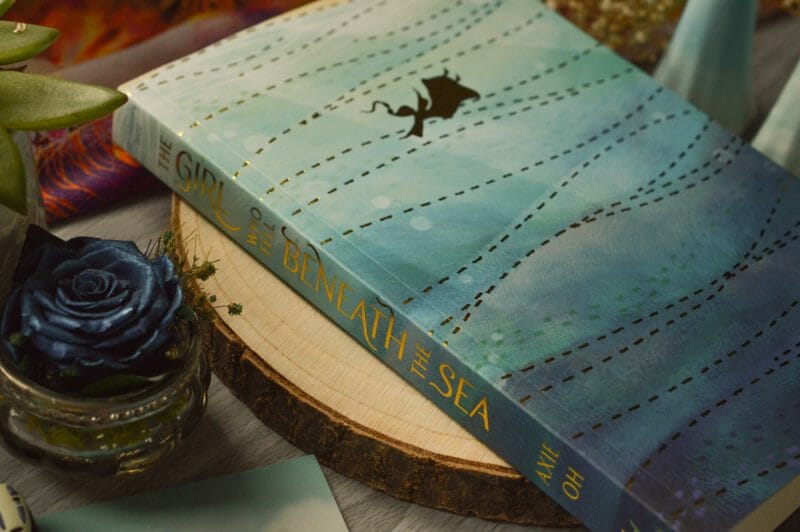 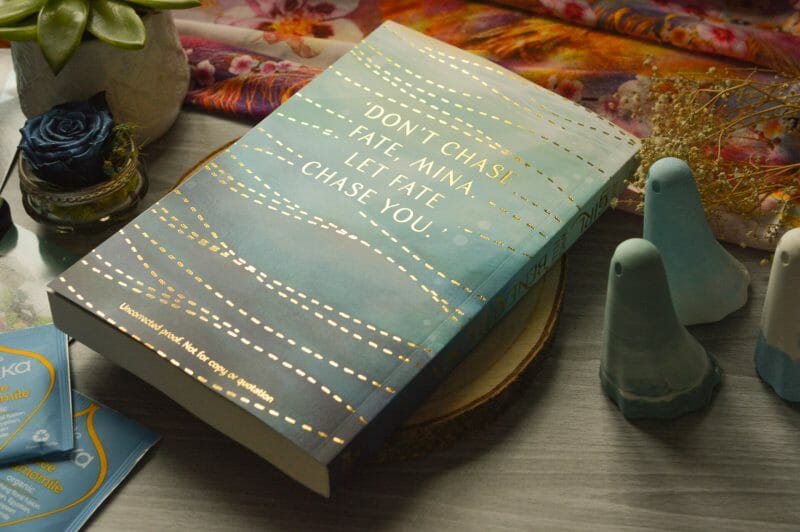 Previous Post: « Book Review | Daughter of the Moon Goddess by Sue Lynn Tan
Next Post: Book Review | Only a Monster by Vanessa Len »

✨ What’s something that makes you more likely

✨ What books do you find yourself talking about

Hey loves, what have people been reading this week