Today’s review is for The City of Dusk by Tara Sim, which was the first book I’ve read by Tara Sim but I’m definitely interested in checking out previous releases after reading it!

This was dark and full of magic, with a political race for power involved and many events going on in the sidelines to keep your interest. 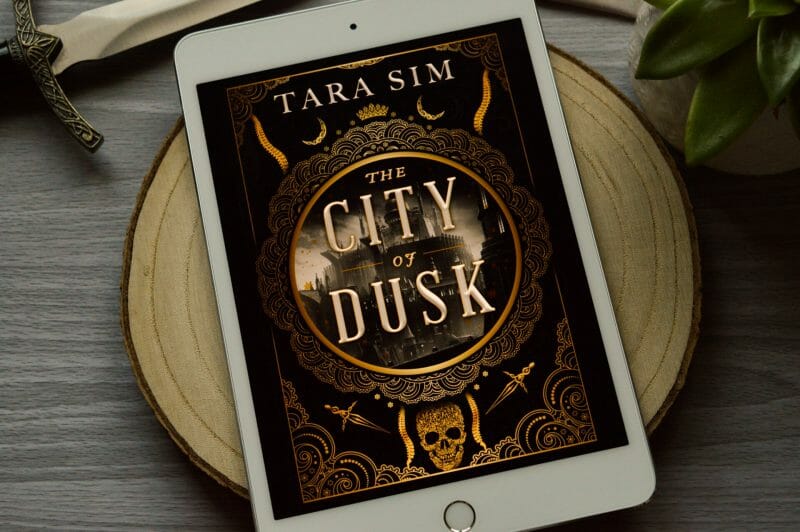 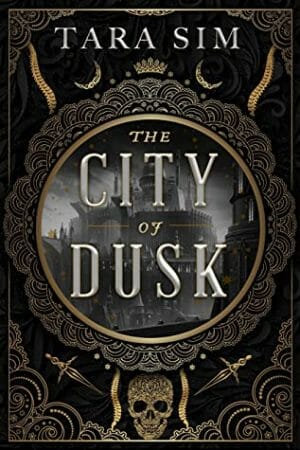 The Four Realms—Life, Death, Light, and Darkness—all converge on the city of dusk. For each realm there is a god, and for each god there is an heir.

But the gods have withdrawn their favor from the once vibrant and thriving city. And without it, all the realms are dying.

Unwilling to stand by and watch the destruction, the four heirs—Risha, a necromancer struggling to keep the peace; Angelica, an elementalist with her eyes set on the throne; Taesia, a shadow-wielding rogue with rebellion in her heart; and Nik, a soldier who struggles to see the light— will sacrifice everything to save the city.

But their defiance will cost them dearly.

The City of Dusk is set in a dark fantasy world, one where the realms were forged by gods and our main characters are the descendants of these gods. Each god has specific powers and, as such, our main characters do as well. We have the following houses:

From the above characters, I absolutely adored Taesia. She’s this force of absolute chaos and clashes immensely with Angelica, but honestly, it feels as though this is due to how the two are just so similar. Whereas Angelica will want to burn down someone for hurting her family, Taesia would want to strangle them with shadows and it makes for some interesting scenes between the two! Angelica (fairly ironically nicknamed ‘Angel’ by her mother) is a very closed off person individually. She’s been brought up to believe that she will rule the land (as the King has no heir) and believes in doing things as they’re supposed to be done, much unlike Taesia who despises following rules.

Also on that note, there are some scenes involving violence, murder and gore. This is definitely an adult fantasy.

Risha is an adorable mum-friend, she tries her hardest to follow the rules but a lot of the time she’s just trying to make peace between other members of the group. Her particular story leads her to some questionable places, though she is only doing what she thinks is best for the spirits her family is so strongly connected to.

Nik took some warming up to for me, I think overall at the beginning he was just very good and I was more drawn to characters like Taesia who just didn’t care about the consequences for the majority of the story. His side involved a lot of insight into how he became the type of heir we see, by the end I just wanted someone to give him a huge hug in all honesty.

‘He stared at her, a girl of darkness and desire, and wondered what it was like to be so certain of yourself.’

Representation wise, Risha’s family is desi, Angelica is a lesbian and Taesia is bisexual. I’m not sure if Nik is bisexual as he did seem to have some chemistry with a mysterious male character? Either way though there’s lots of rep and it’s done in the best way where it’s just commonplace, as it should be. Something that does set characters apart in the world though is whether they are descendants of gods or not, the houses are revered in quite a celebrity style and if anyone does anything unbecoming of an heir then eek, better hide before you’re caught.

…back to Taesia for a minute, because I love her a little. She’s so full of sass and honestly, although each of the heirs do have a lot of character growth hers was my favourite to read. She also gets the most endearing of love interests, and there are some of the timeless ‘am I a monster?’ moments and we get some VERY fun scenes between the two. I won’t spoil who that character is though, you’ll just have to read this book instead.

The story is based very much so around the characters and the gods they descend from, the realms are dying without the help of the gods and our main characters are trying to right the wrongs, but in the meantime, there are murders and mysteries that need to be unravelled, along with the use of forbidden magic by secret groups who act like terrorists. There’s always something to keep you reading on.

I loved this book and the only reason I haven’t picked up a physical copy is because I have a special edition arriving, which is perfect because for a book I’ve enjoyed this much I need a special copy of it! Very excited for the next instalment and will be picking up the second book, The Midnight Kingdom, as soon as I can!