Every once in while, you’ll read a book where you fall in love with the plot, the characters, the writing… everything just ends up being the perfect package for you. That’s what happened with The Stardust Thief for me.

So, advance warning, this is more of a hyping up of a book than anything else, because the only thing I disliked about reading it was that it ended and now I have to wait for the rest of this story? I miss the characters already! 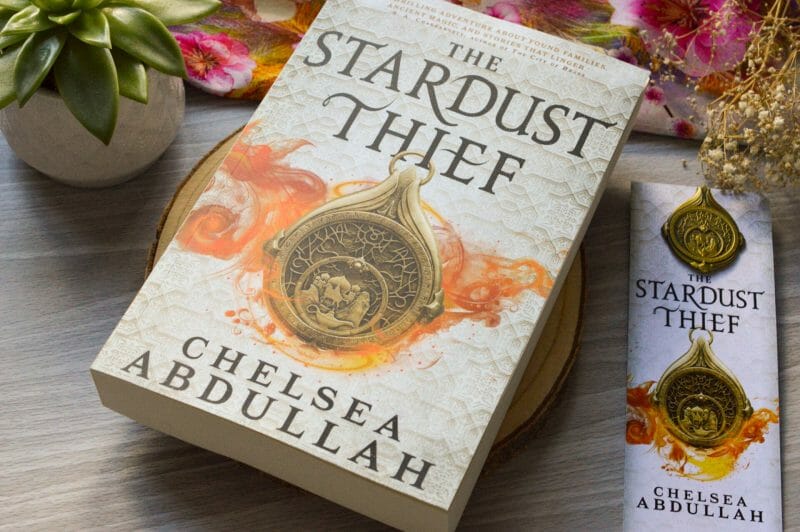 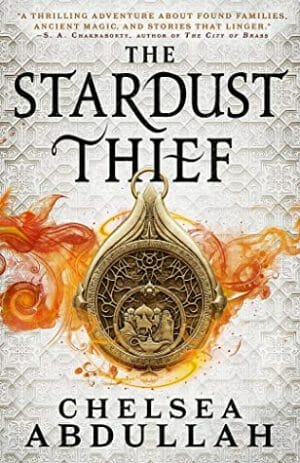 Title: The Stardust Thief
Series: The Sandsea Trilogy #1
Author: Chelsea Abdullah
Publisher: Orbit Books
Release Date: May 19th 2022
Pages: 481
Source: ARC provided by the publisher (this in no way affects my review which is honest and unbiased) and I also have bought the finished editions!
Rating: ★★★★★★★★★★

‘Loulie al-Nazari is the Midnight Merchant: a criminal who, with the help of her jinn bodyguard, hunts and sells illegal magic. When she saves the life of a cowardly prince, she draws the attention of his powerful father, the sultan, who blackmails her into finding an ancient lamp that has the power to revive the barren land—at the cost of sacrificing all jinn.

With no choice but to obey or be executed, Loulie journeys with the sultan’s oldest son to find the artifact. Aided by her bodyguard, who has secrets of his own, they must survive ghoul attacks, outwit a vengeful jinn queen, and confront a malicious killer from Loulie’s past. And, in a world where story is reality and illusion is truth, Loulie will discover that everything—her enemy, her magic, even her own past—is not what it seems, and she must decide who she will become in this new reality.‘

Neither here nor there, but long ago…
The Stardust Thief is a story heavily inspired by One Thousand and One Nights, and its influence can be seen throughout the book. With a gripping story from start to finish, there is a huge focus on character development throughout as it is told from three very different perspectives (of the four main characters):

And then there’s also Qadir, our mysterious jinn bodyguard character, basically the dad of the unruly group.

What starts off as a story about three very different people, who all see their world differently, steadily became one of my favourite found family ensembles.

I think one of my elements to reading a story is when the author can make me dislike a character at first and then make me do a complete 180 and end up loving them… Aisha. She’s one of the Forty Thieves who are tasked with hunting and killing jinn, working under their “king”, Mazen’s older brother, Prince Omar. Overall, Aisha is a fierce warrior just trying to do what she thinks is best, but she struggles to trust anyone at first.

“Some people hide their scars; I prefer to wear mine like badges. They remind me of everything I survived, and of who it is I must seek revenge against.”

Cinnamon roll princes who just want peace and happiness are an absolute treat and a half… Mazen. The sultan wants to keep him safe, not allowing him to leave the confines of the palace without protection though, ultimately, this makes his home become far more of a prison for his wandering story-loving heart. He’s definitely one of the sweetest characters I’ve ever read about.

Then we have the protagonist who doubts themselves as a protagonist, which is something I personally adore to see because it’s nice to see them realise they are more than they think? That’s Loulie. She’s been through so much trauma, but her relationship with Qadir is endearing from the very beginning. It’s clear he’ll do whatever he can to keep her safe, simultaneously he takes on a kind of father role to her.

Qadir is an adorable yet mysterious character, and I loved how we didn’t get his perspective because it’s emphasised his mystery whilst he was mentioned a lot in Loulie’s chapters, which really reinforced their bond. Another thing I ADORED about Qadir was his ability to shapeshift into a lizard, absolutely biased from having a love of reptiles, but even still.

I didn’t see some of the twists coming, even though when they were revealed it was very much a case of ‘oh I should have’, I think I was just so engrossed in the story at the time that I couldn’t see past that point.

Jinn within the world are mostly seen as deadly creatures, more valuable dead rather than alive. Loulie, being friends with a jinn, of course knows that this isn’t the full truth and Mazen is… fairly open-minded about them, though he’s been taught to fear them his entire life. Aisha begins the story hating every single jinn and would gladly murder them all in a heartbeat.

Storytelling is a huge element within, which is a beautiful homage to One Thousand and One Nights in itself. Our doe-eyed Prince is absolutely in love with telling stories and hearing them, and it was just an endearing part to read whenever he had chance to: it makes him easy for the reader to relate to also, because you’re so enchanted by Abdullah’s words that you’ll emphasise with him entirely.

‘To him, stories were truths painted over in gold.’

Lastly, I want to add that writing up this review was fairly difficult. I adored this story so much and it was exactly what I was hoping for and then some. It’s the kind of ‘I loved this book’ feeling that’s hard to put into words, but I’ll most definitely be picking up the rest of this promising, enchanting series as soon as possible. 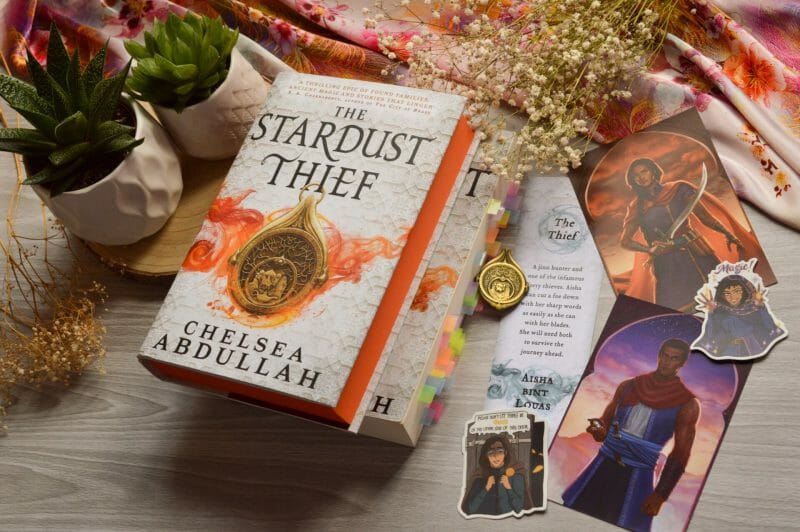 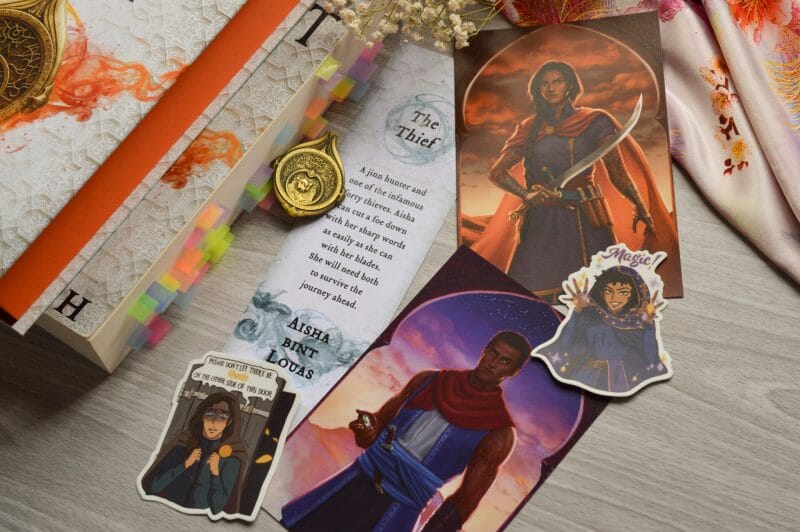 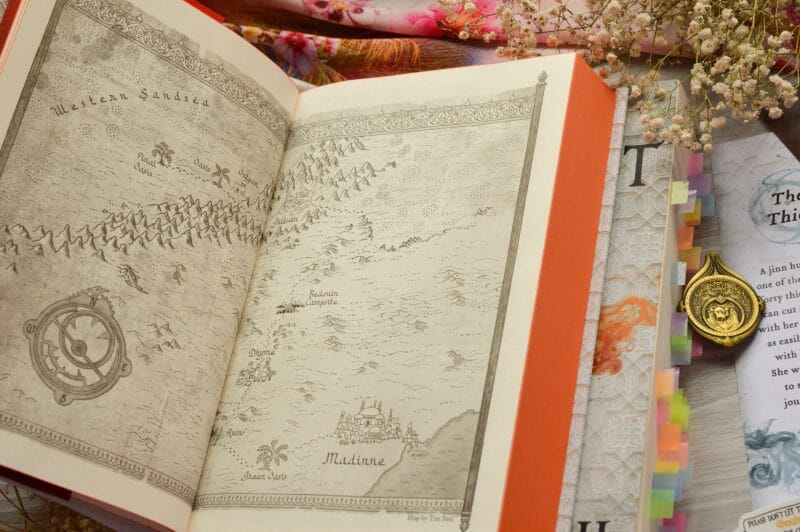