Today’s post is my part of the blog tour for Song of Silver, Flame Like Night by Amélie Wen Zhao, run by Turn the Page Tours. My stop today features my review for this highly anticipated 2023 release, and I found it to be a completely enchanting and awesome read!

I had my eye on this book for a while, which meant that the excitement I had for it in advance was ridiculous, but it definitely met my expectations and exceeded them, I’m just very sad I don’t have more to read for now (though I’m looking forward to the reading pack that Amélie is very kindly sending to those who sign up on her website for).

Check out my full post below, including a link to a giveaway for this book! 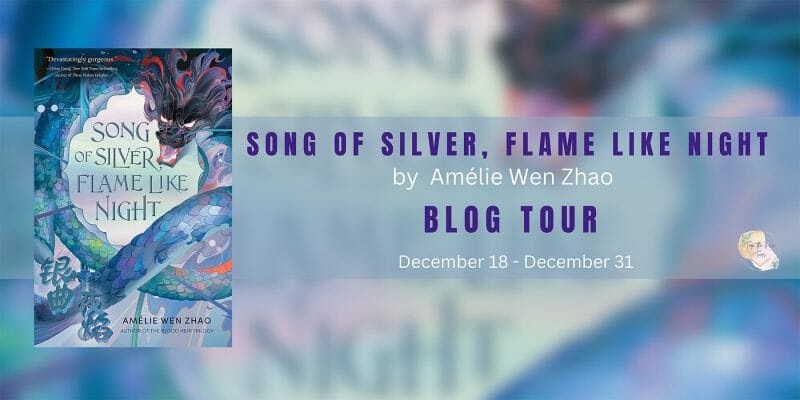 In a fallen kingdom, one girl carries the key to discovering the secrets of her nation’s past—and unleashing the demons that sleep at its heart. An epic fantasy series inspired by the mythology and folklore of ancient China.

Once, Lan had a different name. Now she goes by the one the Elantian colonizers gave her when they invaded her kingdom, killed her mother, and outlawed her people’s magic. She spends her nights as a songgirl in Haak’gong, a city transformed by the conquerors, and her days scavenging for what she can find of the past. Anything to understand the strange mark burned into her arm by her mother in her last act before she died.

The mark is mysterious—an untranslatable Hin character—and no one but Lan can see it. Until the night a boy appears at her teahouse and saves her life.

Zen is a practitioner—one of the fabled magicians of the Last Kingdom. Their magic was rumored to have been drawn from the demons they communed with. Magic believed to be long lost. Now it must be hidden from the Elantians at all costs.

When Zen comes across Lan, he recognizes what she is: a practitioner with a powerful ability hidden in the mark on her arm. He’s never seen anything like it—but he knows that if there are answers, they lie deep in the pine forests and misty mountains of the Last Kingdom, with an order of practitioning masters planning to overthrow the Elantian regime.

Both Lan and Zen have secrets buried deep within—secrets they must hide from others, and secrets that they themselves have yet to discover. Fate has connected them, but their destiny remains unwritten. Both hold the power to liberate their land. And both hold the power to destroy the world.

Now the battle for the Last Kingdom begins.

I should probably begin my review for this book by saying that I had my eye on it for a pretty long time, having seen Amélie post about it on her Instagram frequently for a while. Each new post since… late-August made me more and more excited to read it, and once I’d read a couple of chapters I knew I had to grab personalised copy from Books of Wonder!

We have two main points of view within Song of Silver, Flame like Night (SoSFlN): Lan and Zen. Lan is a kind of feisty yet very sweet sunshine main character, with Zen acting as the more reserved of the two and fairly mysterious throughout the majority of the story. In addition to these two perspectives, the story itself is layered, the main part being the impact of the western, Elantian conquerors on the Hin’s homeland. For both aspects of the story, Zhao delves into the impacts of seeking power; how too much can upset the balance of the world and power should be monitored. The four demon gods–the azure tiger, crimson phoenix, black tortoise and silver dragon–play a profound part in the story, with a rich history of having been used in power plays throughout the Hin’s legacy.

If you enjoy stories surrounding balance then SoSFlN will be perfect for you. As Lan has essentially been cut off from those who could guide her to mastering her own skills, she ends up being taught (first by grumpy Zen, and then by Masters within a School) the basics from the very beginning. Lan starts off wanting nothing more than the power to destroy the Elantian colonisers, but will she be willing to go against the teachings of her culture to achieve this? A lot of the story also involves Zhao drip-feeding us little hints about Lan’s past, as she herself doesn’t know much about her family at the beginning.

I can’t talk much about Zen, but I will say that I absolutely adored his character, overall. He has a lot of layers to him but he’s so sweet in many instances, I can’t help but love him and Lan together. They have some moments where I absolutely swooned for them.

Favourite couple within the story though? Sorry, but that absolutely goes to Shàn’jūn and Tai, funnily enough another grumpy x sunshine couple! Shàn’jūn is a healer who helps Lan from as soon as she sets foot in the school, whilst Tai is a spirit summoner holds back a lot at first, until he realises that Shàn’jūn counts Lan as a friend and he then begins to warm to her.

Another character around their age is that of Dilaya, who is super headstrong and honestly, I’d be lying if I said I liked her even a little for the majority of the story, she was just a little too mean to Lan and Zen. For a side character though, Zhao gives her an awful lot of character development and I went from almost hating her to finding her to be a strong, caring person by the end of it; she’s just doing what she thinks she needs to protect those she loves.

The writing throughout is beautiful, with the occasional insult like “ratfart” thrown in, which made me chuckle each time (this is Lan’s feistiness here!) and the world? The places untouched by the Elantians were those of wonder and beauty, with the School of the White Pines in particular being an area with a sacred spring and being blissfully kept safe from the conquerors due to a magical boundary.

She would no longer be the flower. She would be the blade.

I really loved SoSFlN on the whole, reading it felt like watching a Chinese xiānxiá fantasy drama and so much happens within the story. The only complaint I have is that it’s a duology; because I’d love if were getting even more from this world! The book is absolutely a must-read for lovers of the following: The Celestial Kingdom duology by Sue Lynn Tan; The Book of Tea duology by Judy I. Lin; Jade Fire Gold by June CL Tan; The Kingdom of Three duology by Joan He; and the Six Crimson Cranes/The Blood of Stars duology by Elizabeth Lim.

The last thing I’ll say is that the ending emotionally destroyed me and I cried rather a lot. Have tissues ready for it! 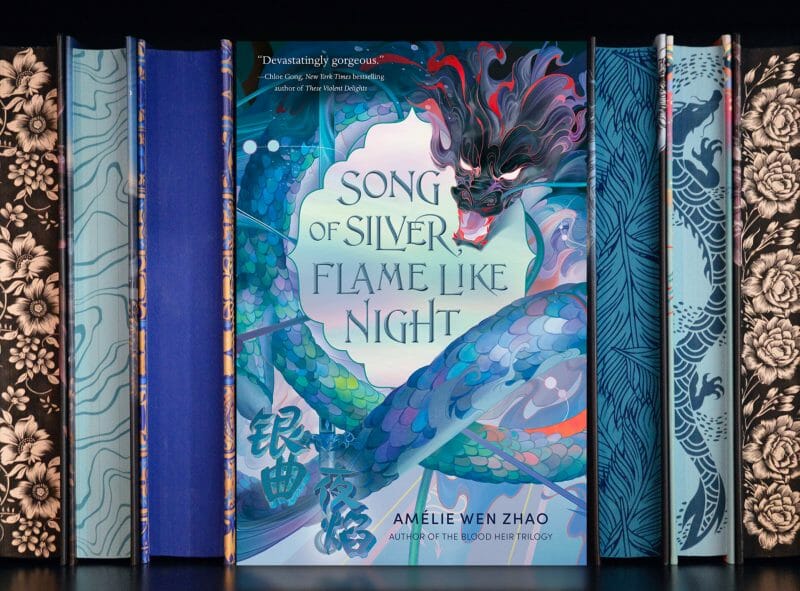 Amélie Wen Zhao（赵雯）was born in Paris and grew up in Beijing, where she spent her days reenacting tales of legendary heroes, ancient kingdoms, and lost magic at her grandmother’s courtyard house. She attended college in the United States and now resides in New York City, working as a finance professional by day and fantasy author by night. In her spare time, she loves to travel with her family in China, where she’s determined to walk the rivers and lakes of old just like the practitioners in her novels do.

Amélie is the author of the Blood Heir trilogy and the upcoming Song of Silver, Flame Like Night duology.

Amélie is represented by Peter Knapp of Park Literary & Media.

For the chance to win one of two copies of Song of Silver, Flame like Night, courtesy of the publisher, follow the link below!

Both the US and UK covers for this book are absolutely too pretty not to show off, both the below and above are photoshopped, but nevertheless I’m super excited to eventually have both as part of my book collection! (Including the ~mystery~ book box edition and the Barnes and Noble edition that my friend Elli is kindly helping me acquire! 💜) 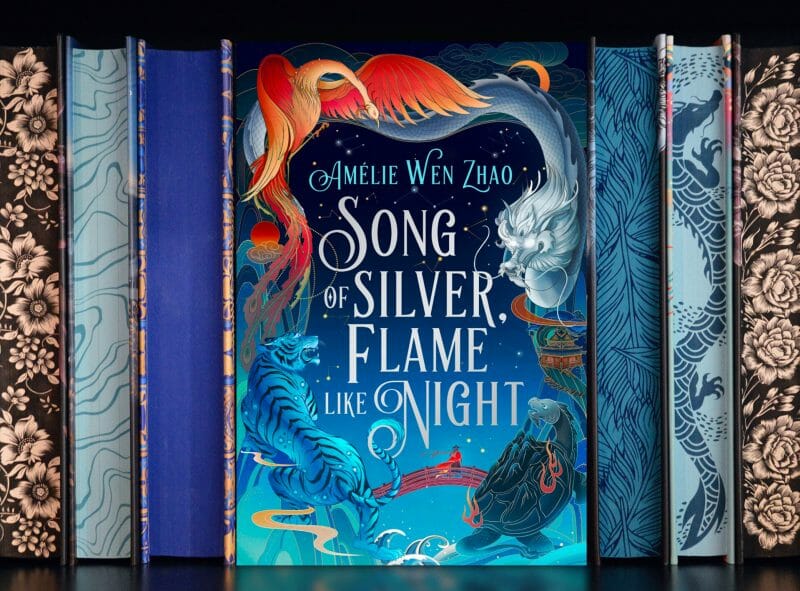