Today’s review is for the second book featured in golden trifecta of sapphic excellence, following on from the first which was The Unbroken by C. L. Clark.

I’m biased in a sense as I love sapphic stories, and The Jasmine Throne was no exception. Added bonus – morally grey main characters… another weak spot for me. And, enemies to lovers. 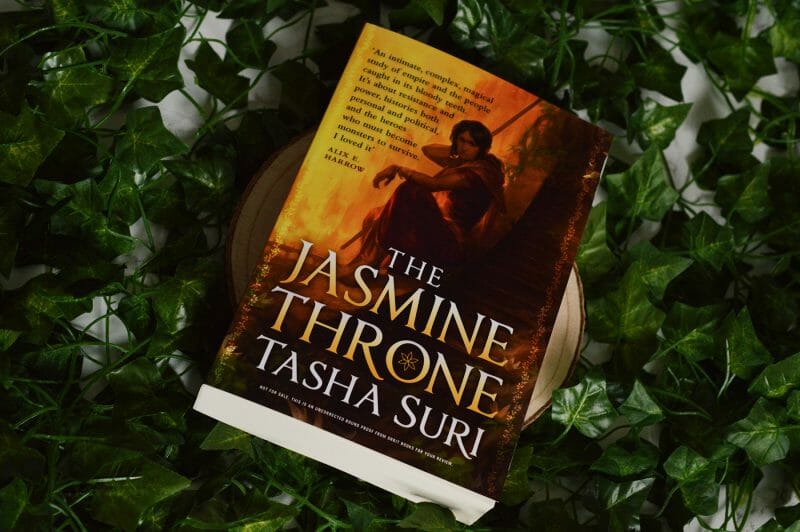 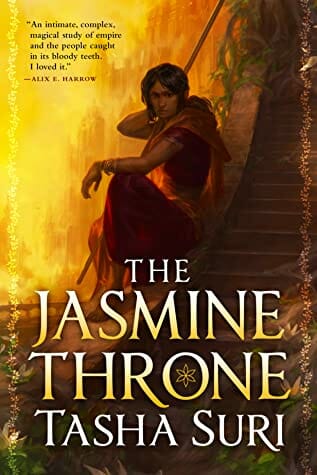 ‘Author of Empire of Sand and Realm of Ash Tasha Suri’s The Jasmine Throne, beginning a new trilogy set in a world inspired by the history and epics of India, in which a captive princess and a maidservant in possession of forbidden magic become unlikely allies on a dark journey to save their empire from the princess’s traitor brother.

Imprisoned by her dictator brother, Malini spends her days in isolation in the Hirana: an ancient temple that was once the source of the powerful, magical deathless waters — but is now little more than a decaying ruin.

Priya is a maidservant, one among several who make the treacherous journey to the top of the Hirana every night to clean Malini’s chambers. She is happy to be an anonymous drudge, so long as it keeps anyone from guessing the dangerous secret she hides.

But when Malini accidentally bears witness to Priya’s true nature, their destinies become irrevocably tangled. One is a vengeful princess seeking to depose her brother from his throne. The other is a priestess seeking to find her family. Together, they will change the fate of an empire.‘

I really enjoyed Tasha Suri’s Empire of Sand, and the lead up to this book had me so excited due to morally grey characters and sapphic love. Also, plant magic was mentioned and that’s slowly becoming one of my favourite types of magic! In The Jasmine Throne, it’s mostly seen as a curse as many begin to suffer symptoms from “the rot” where parts of them start to turn into plants. It sounds like a gruesome way to die but the descriptions make it seem so beautiful at the same time.

So, our two main characters really are Priya (a maidservant with a glorious secret) and Malini (a princess who’s been locked away). The story itself is told from several points of view though and although that’s something I sometimes struggle with, there was no denying that each character had their own voice, ensuring it was easy to follow throughout.

The ongoing theme with the female characters is they pretty much always appear to be meek, but that’s generally just a front for them all to protect them. The world created by Tasha is pretty much a man’s world where females are seen as something to be scared of in a way. They’re burned as a way of “ascending” but it just comes across as men being terrified of them being more powerful.

Tasha Suri’s overall world-building is fantastic, as always. Her descriptions of the world are so detailed and I especially loved how she described the Hirana and how it reacted to those who belong to it. Without giving too much away, Priya is one of these people and she’s able to travel around the Hirana safely due to that (whereas it’s basically a deathtrap for the majority).

Malini is imprisoned in the Hirana because, as we find out very early, she didn’t want to burn. She’s kept practically in isolation and there is a woman who it basically seems is just there to convince her to burn, or just slowly kill her, as ya do.

But Priya is a part of the group of maidservants tasked with cleaning the area and preparing food whilst Malini sleeps. One thing leads to another and Malini catches sight of her… but again I don’t want to give too much away. Priya’s character though is just so sweet on the whole, she does all she can to protect those around her that she loves and it’s plain to see that throughout the story. The first sight we even get of her is her going into the city to buy sacred wood to protect children who are suffering with the rot.

“Power can be looking after people. Keeping them safe, instead of putting them into danger.”

There is so much happening in this cruel world behind the scenes though, including political plays and rebels wanting to restore Ahiranya to its former glory from before the Parijati took hold of the land. We’re also treated to flashbacks throughout which delve into the characters’ pasts and really flesh them out, helping us to see how they are the way they are.

I loved Malini’s character, even though she suffered so much she stayed strong and true to her cause throughout, and I really admired how she was willing to do whatever it took. She was cunning throughout and such a great match for Priya, she could see that Priya was more than just a maidservant from their first encounter.

Watching them yearn for each other whilst constantly trying to deny it to themselves was another golden gem in this story. They can’t trust each other, they shouldn’t care for each other, yet… they’re still a perfect match. Two dangerous women who complete each other.

This was more than simple fascination. This was attraction and it was… not remotely convenient.

Another character I definitely admired was Bhumika. Married to the regent (a Parijati) but of Ahiranyi nobility, she carries his child but is well aware that he is still her enemy. The conflicting emotions she feels are easy to see and yet, no matter what, she puts her family and home first every time.

Bhumika was all falsehood: meek to the world, fire in her heart.

Overall I just loved this story, it was rich in Indian-inspired fantasy world-building which made it both a different and utterly beautiful read. I’d recommend this to anyone but especially if you love stories with morally grey characters and essentially fighting for freedom. Found family is another lovely aspect to this story, but I feel like if I delved into that I might give a little too much away. I’ll definitely be reading the next book to see what happens to the characters! 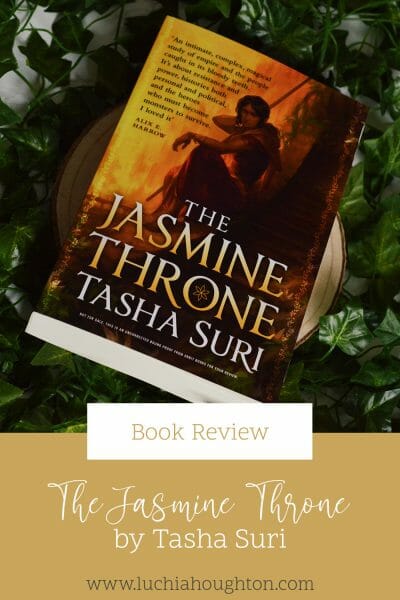 Previous Post: « Book Review | The Shadow of the Gods by John Gwynne
Next Post: Illumicrate Unboxing May 2021 | Change Your Stars »